Father who collapsed and died after hearing of his seminarian son's death has been buried alongside with him. 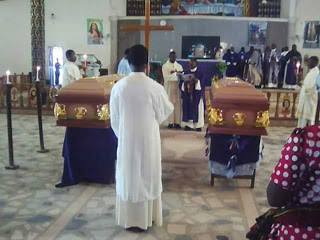 The seminarian died during Fulani herdsmen attack in Enugu 3 months ago.  Read according to Ibeneme Humphery who shared the photo....

"Is the duty of our elected Governors to protect the live and property of its people. Enough of this killings.
The burial of the seminarian' who was killed by the fulani herdsmen at Attakwu AKAEGBE UGWU IN NKANU WEST LGA ENUGU STATE.
When he was killed and his father heard about the news, he fell down and died. The two were buried on 18-11- 2016 at Ebenator Ekwe Orlu, Imo State.
May their souls rest in peace. Amen"