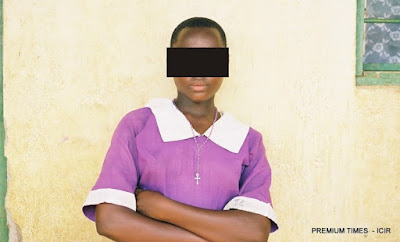 Sources told NAN that the teenager was abducted on January 5, by the cultists.

The report said that the victim, who went into coma after the rape, is being treated at the Benue State University Teaching Hospital, BSUTH, Makurdi.

The victim’s father, Terlanga Ugba, told journalists at the hospital in Makurdi on Monday that his daughter left home at about 11 a.m. on January 5 to buy some tailoring materials for her sewing work but never returned.

Mr. Ugba said that they searched for her in the hospitals, churches and friends’ houses but did not find her until the following day when he lodged a formal complaint with the Katsina-Ala Police Station.

He stated that he followed up the development with a special prayer session for her recovery.
He narrated that a church member later called to inform him that she saw his daughter with a suspected notorious cultist (name withheld).

Mr. Ugba said he organised another search party on receiving the phone to comb all the criminal hideouts in Katsina-Ala until they found the girl being dragged out from one of the hideouts by the river bank to cover tracks of the crime.

He said the search party arrested the suspect with the help of some Okada riders and took him and the girl to the police station.

According to him, he was later asked by the police to take the girl to the hospital for medical attention while they detained the suspect.

He said that he rushed his daughter to Nguher Clinic, Katsina-Ala, in a semi-conscious state where she narrated her ordeal to him and the doctor on call.

However, Mr. Ugba said that the vigilante group in the area arrested one of the suspects (name withheld) and handed him over to the police.

According to the victim, she was abducted by a group of boys as soon as she stepped into their street on the fateful day.

She said that she was blindfolded and taken to an unknown place where they gave her four injections.

She told her father and the doctor that she was not given water or any food for the two days they kept her there, adding that they forced her to smoke weeds while they took turns to rape her.

She added that the suspects, three in number, told her that she was always snubbing them whenever they needed her attention with a threat to deal with her.

Austin Oko referred the victim to BSUTH upon a medical assessment which revealed sexual assault on the girl, no bleeding seen while traces of hard substance was found in her blood.

The Commissioner of Police in the state, Bashir Makama, confirmed the report, saying that he had ordered the DPO in Katsina-Ala to transfer the case to the state CID for further investigation.

Mr. Makama assured the public of police action, explaining that rape was a capital offence and no police officer could play with it.

He said investigation was on top gear to arrest the fleeing suspects.