Kenyan Woman Whose Hands Were Chopped Off By Husband For Being Barren Is Now Pregnant For Another Man, Admits To Cheating


Jackline Mwende, the Kenyan woman whose husband chopped off her hands for allegedly being barren has admitted she cheated on her husband after he walked out on her,  and the brutal attack occurred three days after she conceived. 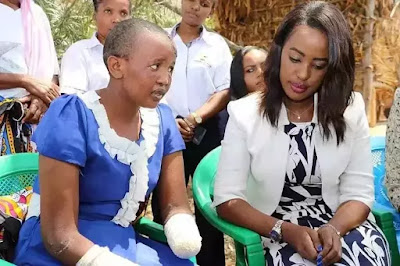 It was reported that her husband, Ngila was the one with the fertility issues that could have been treated.

Well, Mwende has now spoken of her unexpected pregnancy, admitting she had an affair with a close friend she has been dating and refuses to name.


According to Nairobi News, she conceived three days before her husband attacked her.

“A day earlier I had been spotted with the father of my unborn child. We had sought accommodation in Machakos town because I did not want to bring him to my matrimonial bed. It was on the Saturday, July 23, and after spending time with him, I went back home, I lived alone because my husband had taken off three months earlier. On 24th, Ngila attacked me with the panga, forcing doctors to amputate both my hands,” said Mwende.
She added that she has no regrets for her relationship because she opted for this route out of a deep desire to bear a child.

On Tuesday, February 21, she received a four bedroom house and a fully stocked shop from a group of female parliamentarians in conjunction with an international company.