4-year-old Risikat Fayomi has been brutalised by her grandmother, identified simply as Ayinke, aka Iya Adijat, on Canaan Land Estate in the Matogun area of Ogun State.

The four-year-old victim had been locked up in a room when a passerby heard her groaning with pain. 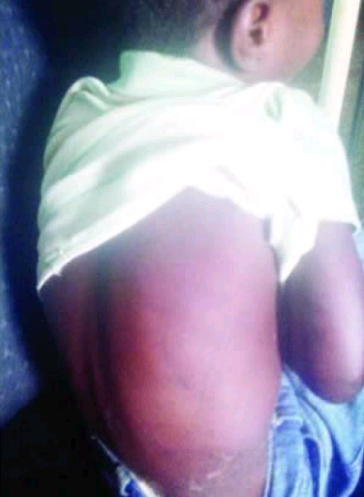 According to Punch Metro, efforts by residents, who besieged the house, to gain entrance were futile, as the doors and windows were locked.

It took the intervention of policemen from the Ajuwon division before the doors could be broken and the victim rescued.

She was said to have been rushed to Tamara Medical Centre, a private facility on Ajuwon Road, in the Akute area.


Punch learnt that nurses and doctors at the hospital battled for three days to save Risikat’s life as she had been incapacitated by the torture.

When Punch correspondent visited the hospital, he observed Risikat singing in Yoruba.

“Mo dupe mo fiyin foluwa; a o tori mi raja lowo baba oniposi; mo dope mo fiyin foluwa (I give praise to God that nobody patronised the coffin dealer because of me),” she sang.
A doctor at the hospital, who did not want to be identified, said Risikat had been singing the song since she regained her strength.

He said,
“She was brought here by the police and people of the community. Then, she was in serious pains and could not walk or talk. Her back, hands and legs were swollen. We commenced treatment immediately and after an X-ray, we discovered that she had fractures. It took three days to get the pains to subside.  Despite that, she still feels a lot of pain when you touch the arm and leg. We have decided to transfer her to the National Orthopaedic Hospital, Igbobi, in Lagos. Since she was brought here on March 3, we have been spending our money to treat her.”
A nurse at the hospital said Risikat also suffered malnutrition.

She explained that the hospital had also been responsible for her feeding, adding that her relatives had not shown any concern.

“Whenever we asked her if she would return home, she would start crying and begging that she did not want to go back home,” she added.
A community leader, Adewunmi Oyebode, explained that Risikat had been beaten for allegedly urinating on a prayer mat.

“The girl is not staying with her parents. Her mother abandoned her with the father when she was barely one year old. Since the girl’s father did not have a stable job, he in turn took her to the grandfather. The young man’s mother is dead and his father has a second wife, who we all call Iya Adijat (Ayinke). Iya Adijat is her step grandmother. The woman had been maltreating her. Whenever she went for Arabic class and they close at 6pm, she would not want to return home. If you tell her to go home, she would start crying. I learnt that the step grandmother had instructed that whenever they were observing the Islamic prayers, nobody should leave the prayer mat. So, the girl became pressed and since she could not leave the mat, she urinated on the mat. After the prayer, she descended on her.”
Oyebode said Ayinke, who is about 47-year-old, later put Risikat in a room and locked her inside.

He explained that a herbalist, who lived close to the house, heard the groan of the victim and raised the alarm.

The community leader said residents could not open the door.

“We called the police and they broke down the door and rescued the child. We discovered that her hands and a leg had been fractured. There were stripe marks on her body. When we were taking her to the hospital on a motorcycle, she was groaning with pain,” he added.
He said the hospital was awaiting the payment of its N30,000 bill before referring the victim to the Igbobi Orthopaedic Hospital for further treatment.

He added that the community had started a manhunt for the suspect, Ayinke.

Punch Metro learnt that Risikat’s father, Abass, a 25-year-old tipper driver, showed up at the hospital on Friday to see his daughter.

He could not be reached on his telephone line by our correspondent as of press time.

The grandfather, Abiodun, said he had divorced Ayinke, adding that they were not living together.

“Abass took the child to Iya Adijat because they live in the same neighbourhood. Everything is still a mystery to me,” he added.
The Ogun State Police Public Relations Officer, Abimbola Oyeyemi, confirmed the incident.

He noted that the state command had launched a manhunt for Ayinke.

He said, “The grandma is alleged to have broken her arm and an X-ray revealed she sustained compound fractures. Although the suspect is still at large, we were told she denied being responsible for the injuries and claimed that the girl fell. Investigations are ongoing.”