Two kids between the ages of eight months and two years are currently at the General Hospital, Ijebu Ode, Ogun State, seeking to reunite with their family.

Their mother was among some passengers that reportedly lost their lives to an accident along the Ibadan-Ijebu Ode Road on Sunday. The siblings, a boy and girl, however, escaped death by a whisker. 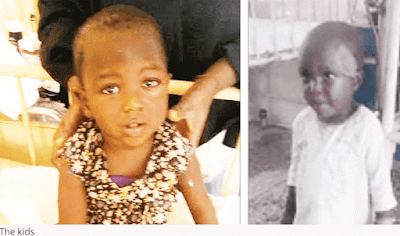 PUNCH Metro reports that the woman and her children had boarded a bus from Ijebu Ode en route to Ibadan, Oyo State. The bus was said to have had a head-on collision with another vehicle around Awa

community – a few kilometres from the take off point.

It was learnt that policemen and officials of the Federal Road Safety Corps removed corpses of the victims and took the injured to various hospitals in the area.

The men, however, did not see the siblings and another child, aged four, who were reportedly trapped in a river around the scene of the crash.

Punch learnt that a Good Samaritan heard some faint noises coming from the river area and thereafter rescued the kids.

The three children were said to have been brought to the General Hospital, Ijebu Ode, with varying degrees of injury. The four-year-old child later died.

A nurse at the hospital, Tope Asiru, who tends to the kids at Iye Subomi Child Care Centre of the hospital, told PUNCH Metro on the telephone on Wednesday that the children were brought to the hospital in the presence of policemen.

She added that the police operatives had not come back to check on them since Sunday.

Although the identities of the policemen could not be ascertained, the hospital is within the Igbeba Area Police Command.

Asiru stated that the FRSC office was called early on Wednesday when the police did not show up. The latter had also yet to visit the hospital as of 8.30pm.

She said,
“The children are siblings. One is a female of about eight months and the other, a male, of about two years old. He has not really told us his name. He is just saying, ‘Abu,’ which means father in Arabic. Their mother got to the hospital, but she had multiple fractures. We were unable to get any information from her before she gave up.“The children are still here; nobody has come to look for them. They were brought on Sunday around 3pm.“FRSC officials and policemen brought the victims to the hospital. Some were taken to private hospitals. A good Nigerian saw some particles in the river around the scene of the accident. He moved near and saw the children and another four-year-old boy, who died on arrival at the hospital.“Policemen were still around when the children were brought to the hospital. They even collected some property from some victims and recorded them. But they have not visited the hospital since then.“The mother of the deceased child is alive in the hospital. She was the one who told us that she boarded the same vehicle with the deceased mother and that she saw the two kids with her.”The nurse explained further that the hospital management had tried to reunite the children with their family to no avail.

The Ogun State Sector Commander of the FRSC, Clement Oladele, said he had directed the unit in charge of the area to visit the hospital.
He said,
“Thanks for the information. I have told the area commander at Ijebu Ode. But if there is an accident, the moment we take victims to hospitals, that is where our work ends. The only thing we can do is to be checking if they have not died.”The Ogun State Police Public Relations Officer, ASP Abimbola Oyeyemi, said the case was not formally reported to the police. He said,
“I have called the Igbeba Police Division and I was told that no case of such was reported. Let the hospital management make a formal report at a nearest police station and necessary actions will be taken.”