US Government Bans Laptops, Tablets On Flights From Muslim Nation


Continuing on its immigration laws and ban, the United States government has banned electronic devices such as laptops, tablets, digital cameras and other large electronics in the carry-on luggage of passengers on flights coming from Muslim nations.

This ban is majorly for 8 countries  in the Middle East and North Africa, and this new rule which has been officially announced, will take effect today. 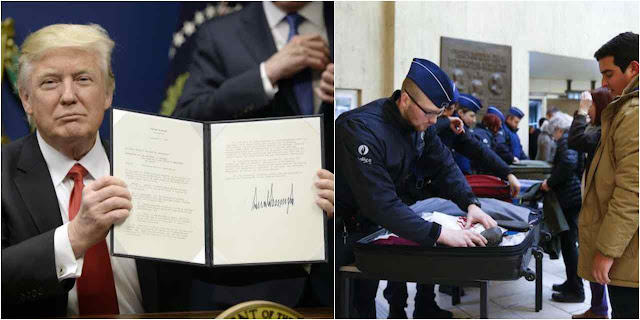 It was also gathered that this new rule, will apply nonstop to U.S.-bound flights from 10 international airports in the cities of Cairo in Egypt, Amman in Jordan, Kuwait City in
Kuwait, Casablanca in Morocco, Doha in Qatar, Riyadh and Jeddah in Saudi Arabia, Istanbul in Turkey, and Abu Dhabi and Dubai in the United Arab Emirates.

Associated press also reports that this new rule will only apply to foreign carriers including the Royal Jordanian Airlines, as only only cell phones and approved medical devices would be excluded from the ban. No American carrier will  however be affected.
Though the reason for this ban is still unclear, as the Trump administration attempts to overturn court rulings against its latest travel bans affecting people from six Muslim nation, however, reuters allege that this ban came as a result of the threat the United States government learned of weeks ago.