THE Edo State Police Command said it arrested some lecturers of the Ambrose Ali University, Ekpoma for allegedly engaging in cult-related activities.


According to PUNCH
'The Commissioner of Police, Haliru Gwandu, who disclosed this to journalists in Benin on Tuesday, added that firearms were recovered from the arrested academics. 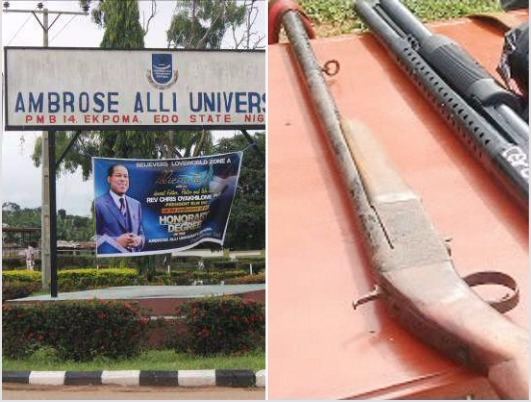 Gwandu also said that among those arrested was a professor, from whom a double-barrel gun, single-barrel gun and one pump action gun were allegedly recovered.'
The police commissioner said, “The professor was arrested. He was granted bail. The case is under investigation.”

Gwandu’s statement came less than a week after the command refuted reports that its operatives allegedly brutalized the Dean of the Faculty of Law of the university, Prof. Sunday Edeko.

The commissioner expressed displeasure over the high rate of cultism around the institution located in Esan West Local Government Area, which he said had claimed many lives.

He said there had been distress calls from members of the university community that cult groups were unleashing mayhem in the area.

“It was a distress call from the community; the university community made a call that cult groups were killing and they killed so many.

“And at the time when they (policemen) went to inspect a site, they discovered more than 14 beheaded students at that particular time,” he said.

He, however, vowed that the police would ensure that the leaders and members of cult groups in the area were arrested and charged to court.

Gwandu said, “We have a lot of issues with that particular university. There are some senior lecturers that were apprehended with firearms.

“So, we are going to arrest those who are mentoring and those who are real cultists and charge them to court. There is no going back.”