Coming after the arrest of the South Africa based Nigerian Pastor, Tim Omotosho, for molesting more than 30 girls in his church went viral, one of his church members has taken to social media to warn South Africa of the "biggest natural disaster" that awaits them, for arresting 58-year-old flamboyant evangelist. 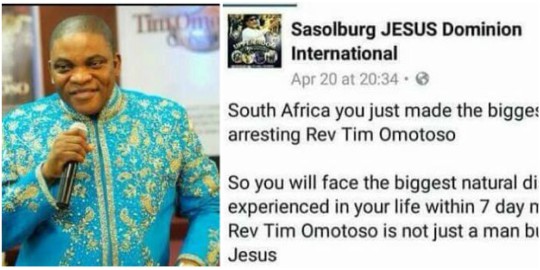 It should be recalled that Pastor Tim, who has churches in Cape Town, Johannesburg, Bloemfontein, among others, was arrested at the Port Elizabeth Airport on Thursday, for allegedly trafficking more than 30 girls and women, who were from various branches of his church to a house in Umhlanga, KwaZulu-Natal where he allegedly sexually exploited them. The Pastor who went into hiding and destroying the 3 lines linked to him before his arrest, appeared in court on Friday but was denied bail.
Here's what his church member wrote;