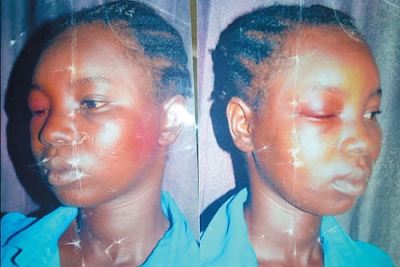 A bakery worker, 23-year-old Sherifat Saka, was tired on the night of May 13, 2017 as she retired to bed in the room she shared with eight others on Ifelodun Street, Amukoko area of Lagos. It was an accommodation she shared with other workers of the bakery.

But there was noise as a result of the discussion between two of her roommates when an older worker, angrily stormed out to make a call.

The woman referred to by other workers as Iya Mayowa, allegedly picked up her phone and placed a call to one of her acquaintances at the Pako Police Division, Amukoko, Omotosho Abiodun, a sergeant.

Moments later, Abiodun in company with a colleague stormed the house at about 2am.


She said, “He came and said we were under arrest. He told three of us that we were going to the station. I noticed that the two others were already heading for an unmarked SUV they brought there.

“But I told them I could not follow them. Apart from my underwear, I was tying just a wrapper. But they did not care. They did not wear uniform and did not show us any identity card apart from the fact that they brought an unmarked vehicle there.

“How could I follow people like that in the dead of the night?I told them that if indeed they were from the police station at Amukoko, I would walk there because it was a short walking distance.

“That was when the man started to beat me. They forced me in the vehicle, I was afraid and refused to enter. They stripped me in the process.”
According to her, as soon as they got to the police station, another round of beating started.

“They hanged and beat me till I fainted. When I did, they took me outside and poured water on me. Later, the man brought some clothes for me to wear because I was naked,” Saka said.

She said three more of her colleagues were later arrested for breach of peace.

According to her, when her bosses at work later came to the station to plead, the divisional crime officer of the station prevailed on Abiodun to release them all.

The policeman did not release them until they paid N33,000.

However, things took a different turn when a human rights group, Movement for Islamic Rights and Justice got involved in the case.

The National Director of Operations of the group, Mr. Shakirulai Abdullahi, said he had tangled with
Abiodun in the past as a result of manhandling of members of the public.

Few days later, he rearrested Saka for being too stubborn and also for consulting a human rights organisation.

“Despite our pleadings and even the appeal of the divisional police officer of the station, he insisted on charging her to court for assaulting him,” Abdullahi said.

That day, Abiodun dragged Saka before an Agbomalu Magistrate’s Court, Agbomalu, Apapa on two counts of assault and breach of peace.

The charge accused her of conducting herself “in a manner likely to cause breach of peace by cutting Sylva Chain and tearing off the shirt of one Sergeant Omotosho Abiodun to resist lawful arrest.

“That you on the same date and time did unlawfully assault one Sergeant Omotosho Abiodun by giving him fist blow on his left eye and causing him bodily pain.”

Saka spent five days in prison before she could perfect her bail condition.

She is now appealing to police authorities to call Abiodun to order, alleging that he had vowed to send her to prison.

When Saturday Punch contacted Abiodun, he confirmed that he was called by Iya Mayowa as a result of the noise of the workers.

“I asked her if she did not recognise us as policemen and she said ‘So what? Should I now run away because of that?’ I was surprised by her attitude and I instructed that she should be put in the vehicle, that was when she started fighting me. She hit me in the eye and I was shocked. Even when we put her in the vehicle, she was still hitting me with her feet and hand.

“When we got to the station, nobody beat her, I only said she should be handcuffed while her statement be taken.

“I insisted I would press charges against her because I did not want the man he brought to intervene in the case to use it against me when they were pleading that I should release her. I have had an encounter with the man before when he caused trouble because of a case I was involved in.”

Abiodun denied collecting any money as bail saying “I am not even the investigating police officer in charge of her case so I know nothing about any money paid for bail.”

But Saka’s boss, Mr. Mumini Shittu, who paid the money insisted that Abiodun was lying.