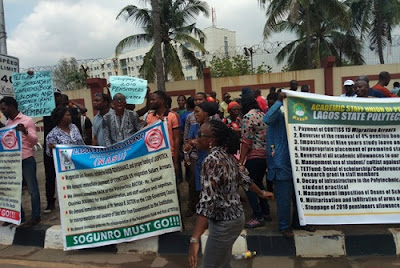 Hundreds of lecturers and Non-Academic Staff Union, NASU, of the Lagos State Polytechnic, LASPOTECH, yesterday stormed the State House of Assembly to protest 87 months of unpaid arrears and other injuctices, demanding the immediate sack of the rector of the institution, Samuel Sogunro.

The protesters said the State Governor, Akinwunmi Ambode has been doing a lot to reposition the institution, including increasing subvention for the school, but lamented that the management of the crisis-torn institution is scuttling the governor’s effort to make the school worthwhile.

The protesters were armed with placards, some of which read: “Militarisation and infiltration of arms on campus by the management,” “Reversal of the removal of 4% pension and annuity,” “TETFUND: Denial of scholarship conference/books publishing and research grant to staff members,” among others.


Spokesperson of the protesters and Chairman, Academic Staff Union of Polytechnic, ASUP, LASPOTECH branch, Akinrinlola Ibotoye said the indefinite industrial action being embarked upon by the lecturers and others was the end result of the rector’s misadministration and insensitivity to the issues that affect the welfare of staff in the polytechnic community.

“We would like to place on record that the on-going industrial action is avoidable. It is as a result of the administration of the polytechnic reneging on the previous tripartite agreement reached on March 7, 2017 by the administration, Council, officials of Ministry of Education and the Staff Unions of the Polytechnic, to commence on the payment of CONTISS 15 migration arrears before the 25th convocation ceremony of the Polytechnic held on March 9, 2017. 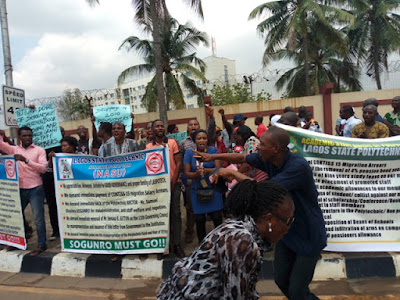 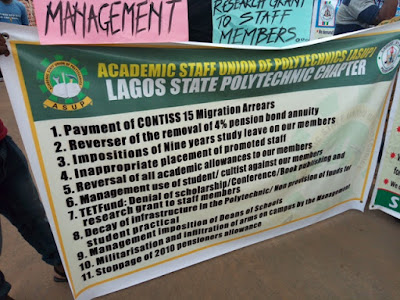