Pa Kasumu Wins N.5m on Who Wants To Be A Millionaire show. Moves Into New Abeokuta Home [PHOTOS] 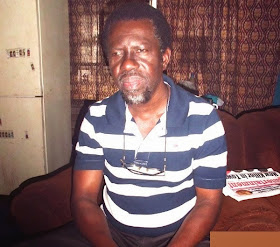 Good news indeed for the veterans in
Nollywood, first it was Chief Lere Paimo
and now Pa Kasumu â€“ good to know that
beautiful things are happening to them.
Itâ€™s a moment of jollification and
celebration for the veteran actor,
Kayode Odumosu, otherwise known as
Pa Kasumu, who is now bursting out of
his health challenge. The ace thespian
has finally moved into his new three
bedroom bungalow in Abeokuta, Ogun
State. According to an industry source,
the talented role interpreter has moved
from his Alayaki, Mushin, Lagos
residence, where he had lived for about
10 years. The source said that despite
the recuperating state of the ace
comedian, he was still very much joyous
and excited about the new
development, singing praises in
appreciation of what God has done in his
life.

â€œPa Kasumu is very happy at the
moment. He has finally moved into his
new house in Abeokuta, Ogun State. I
learnt he relocated on Thursday, April
17, 2014. I also learnt that his former
place in Mushin, Lagos, has been
occupied by another person. I learnt he
should have moved to the place since
January but due to the delay in the
renovation of his newly acquired house.

He was asked to remain in Mushin till
everything was completed. I really thank
God for him. He has started a new life
entirely.â€
An inside source also revealed to
ENCOMIUM Weekly that fortune has
continued smiling on the renowned film
maker as he has just won N500,000, via
the popular MTN sponsored television
programme, Who Wants To Be A
Millionaire (WWTBAM).

â€œI learnt Pa Kasumu just won N500,000
on Who Wants To Be A Millionaire
programme, and he is so happy about it. I
believe with that, his dream of travelling
abroad for further treatment will soon
be realized.â€

ENCOMIUM Weekly, in a bid to confirm
the news, put a call through to Pa
Kasumuâ€™s mobile phone on Friday, April
18, 2014, but it was picked by a woman
who identified herself as his younger
sister. She told us that the Odogbolu,
Ogun born theatre practitioner was out
of town at the moment.
â€œPa Kasumu is not around, but he left his
phone. He travelled out of Ogun State.
He went for treatment. I will inform him
as soon as he returns.â€

We later contacted his spokesperson
and coordinator, Save Pa Kasumu
Initiative, Mrs. Idowu Olajide, and she
confirmed to us that the comic thespian
has relocated to his new Abeokuta,
Ogun State home, adding that he is
happier and much better now.

â€œItâ€™s true that Pa Kasumu has vacated
his Mushin, Lagos residence finally. He
left on Thursday, April 17, 2014. He now
lives permanently in Abeokuta. You will
soon be invited to the place. He would
be happy to grant you a full interview to
show his appreciation to all that stood
by him till date. He only comes to Lagos
on Tuesday of every week for
treatment. He is very much better now.â€

Asked to comment on Who Wants To Be
A Millionaireâ€™s N500,000 prize said to
have been won by Pa Kasumu, she
reacted, â€œItâ€™s true that he won the prize
but he is yet to collect the money. Itâ€™s
not a kind of money thatâ€™s paid instantly.

But hopefully, very soon, he will collect
it.â€