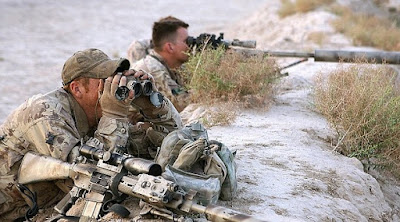 A Canadian sniper has beat the record for the longest confirmed kill in military history by picking off an ISIS fighter from a staggering 11,319 feet.
The bullet was fired from a McMillan TAC-50 rifle set on a high-rise tower and took 10 seconds to travel the 2.14 miles towards the fighter, who was attacking Iraqi soldiers.
This smashed the last record set by a Briton Craig Harrison, who killed a Taliban soldier with a 338 Lapua Magnum rifle at a range of 8,120 feet(1.54 miles) in 2009.
A military source told The Globe and Mail the kill was verified by video, adding: 'This is an incredible feat. It is a world record that might never be equalled.'
The third longest kill was by Canadian Corporal Rob Furlong, who shot down an Afghan insurgent from 7,972 feet(1.51 miles) in 2002 during Operation Anaconda.
And prior to that, Master Corporal Arron Perry hit a terrorist from 7579 feet. He was also Canadian and serving in the same operation.
The longest kill from a US sniper was done by sergeant Bryan Kremer, who hit an Iraqi insurgent at 7,546 feet(1.42 miles) with his Barrett M82A1 rifle in 2004.
The Canadian who achieved the longest kill was operating with Joint Task Force 2, which is training Kurdish forces to fight IS.
Few details are available about their operation, but their last reported location was in the north of Iraq, where a major operation is underway to recapture Mosul.
The sniper has not been named for security reasons and the exact location of the kill has not been confirmed.
Canada's special forces are known for the high skill of their snipers, who are considered among the best in the world.