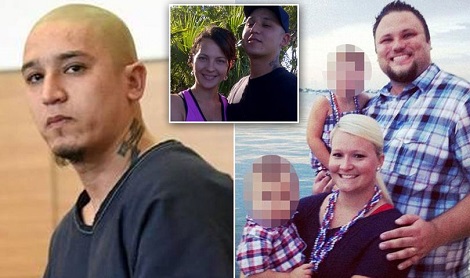 Family meant everything to devoted mum-of-six Amber Avalos. She’d been with her husband Andres, known as Andy, since they were both 16. They had five sons and a daughter, and lived together in the tranquil area of Northwest Bradenton, Florida.

The area is famed for its well-kept home and views of the flowing Manatee River. But despite the peaceful surroundings, Amber’s life was in turmoil as she battled to hold everything together.

Andy had struggled with drink and drugs over the years and it was putting a strain on family life. Amber, 33, was a religious woman. She worked part-time at the local church with the congregation’s children, and walking away from her marriage just wasn’t an option. She’d even prayed with the pastor’s wife to try and stay strong.


On 4 December 2014, Amber took her five oldest children to school and returned home with her four-year-old son. He went off to play video games before he was due to go to nursery. Amber and Andy were in the kitchen when an argument started about him going out drinking the night before. Andy’s rage escalated and Amber told him that she wasn’t afraid of him – or afraid of dying either. Then Andy snapped.

He punched his wife repeatedly, then threw her on the floor of their laundry room. There, he straddled her, kissed her on the forehead, then said, ‘I love you,’ before he strangled her with a cord. Andy then partially suspended her by her neck to finish the job. Even then he feared his wife might be playing dead, so he got his gun and shot her.

The noise disturbed his four-year-old son, who approached and asked where his mummy was, catching a glimpse of Amber’s feet. ‘She’s gone,’ Andy said, and put his son in the car ready to go to nursery.

Suddenly, their neighbour Denise Potter appeared on the driveway. Denise, 46 and a mother-of-three, was a good friend of Amber’s and the pair worked together cleaning houses.

‘I knew she was going to call the cops and I wasn’t ready for the police to come yet,’ Andy later told police.

He allowed Denise into the house and, as she headed towards the laundry room, he gunned her down, firing five times. ‘I don’t know how many times I shot her,’ he later admitted.

Andy drove his son to nursery. Staff noticed he appeared paranoid and defensive – but had no idea why. He dumped his SUV and took a cab to the Bayshore Baptist Church where his wife worked part-time with Rev James ‘Tripp’ Battle, 31. Andy had also once laid some floor in the Battles’ family home.

Tripp and his wife Joy were a respected couple, with two children aged eight and three. They liked to help those in need. But Andy wrongly suspected that Amber and Tripp were having an affair. He headed to the church office at around 12.45pm, found Joy and told her his suspicions.

Joy insisted he was wrong and offered to pray with him. While Andy was there, Tripp, her husband of 14 years, called Joy on the phone. Once he realised that Andy was there, he asked Joy if everything was OK. When she said she wasn’t sure, Tripp arrived in minutes. Joy watched Andy walk out and saw him pull out a gun and shoot her husband three times. As a hysterical Joy dialled 911, Andy shot Tripp one last time.

As Andy fled, he called family members and told them what he’d done. They alerted police who found Amber’s battered body in her laundry room, suspended on a cabinet with multiple blunt force traumas to her face. They found Denise on the ground, still holding her handbag. They soon connected the deaths to Tripp’s.

Police found him 51 hours after the murders, drinking beer with his gun by his side.

Andy was charged with three counts of first-degree murder. He faced life in prison without parole (instead of the death penalty).

In May this year, two years after the murders, Andy stood trial. He pleaded not guilty on grounds of insanity. The defence would have to prove that he didn’t understand that what he did was wrong.

The prosecution told the jury that Andy thought his wife was having an affair with the pastor. Neighbour Denise was just in the wrong place at the wrong time.

At the sentencing, he received three life sentences  one for each victim while statements were heard about the impact of each killing.