Woman, 19, Pregnant For 14-Year-Old Lover Begs Judge To Treat Her As A Juvenile 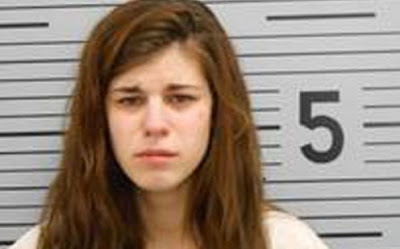 A 19-year-old woman who reportedly fell pregnant by her 14-year-old lover is begging a judge to treat her as a juvenile.

Police arrested Mekenzie Leigh Guffe in March in Alabama after she had allegedly been having sex with a 14-year-old boy, Local 10 news station reports.

She is now facing second-degree rape, sexual abuse, enticing a child for immoral purposes, travelling to meet a child for illegal sex acts and obscenity.


Those came about after police checked her mobile and claim they found sexually explicit video and photos, including some Guffey sent to the boy.

Guffey, whose baby is due in October, wants her rape trial to treat her as a youth offender.

If the appeal is successful, it could mean a much softer sentence if found guilty.

Police officers got involved after Guffey looked for help through a Medicaid program.

The news channel said the social worker she spoke with was required by law to report the relationship to authorities.

Guffey's grandmother Peggy Thompson told reporters in tears that what Guffey needed was help, not a court case.

Thompson said she took her in when she was 11, after she had spent her childhood with her drug addicted parents.

She added that the teen Guffey fell in love with looked a lot older than 14.

It was revealed she was being totally honest and listed the underage teenager as the child's father, reports say.

The woman has apparently confessed to having sex with the boy multiple times in her car in a remote area.

Police Chief Jason Hepler had told Al.com: "She was proud of him being the father until she found out we were going to become involved.

"She told us she didn't count but it was more than a few times that they were together."

The police claim it began in December after they were introduced through a mutual friend at a McDonald's.

The Department of Human Resources and police began investigating Guffey after she applied for Medicaid and identified the boy as the baby's father, the chief told the news outlet.

Guffey was released from the Jackson County Jail on $25,300 bail, but if she is eventually convicted of the rape charge, she faces up to 20 years in jail, unless her claim to be treated as a juvenile is successful.