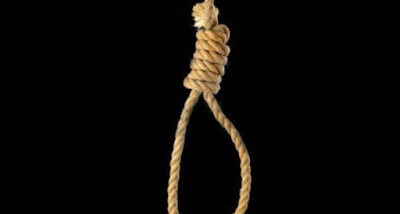 Chigozie reportedly took his own life by hanging himself in one of the rooms in the family house.

The deceased, who was said to have been jobless for several years after secondary school, reportedly killed himself as a result of frustration and hardship.


When Punch correspondent visited the bereaved Igwe family, a few minutes after Chigozie’s body was discovered, scores of sympathisers swarmed the expansive Igwe compound, wailing and weeping profusely; while others sighed and shook their heads in utter consternation.

As at the time of filing this report which was exclusively obtained by our correspondent, Chigozie’s body was still dangling on the rope.

Family members refused to speak with our correspondent, even as youths of the community later locked up the room where Chigozie had hung.

However, a member of the family, who craved anonymity, disclosed that the deceased was the first son of his parents and that he left a suicide note, which partly read, “Die, die, die let nobody weep for me because I am tired of this wicked world.”

Chigozie’s widowed mother who is also a peasant farmer, Mrs. Anthonia Igwe, was summoned from her farm to come see the corpse of her son dangling from a rope.

The thoroughly confused Anthonia wailed profusely and uncontrollably and refused to be consoled, as she rolled on the ground.

She angrily queried Chigozie, “Is this the way you chose to leave this world? Remember that you have committed an abomination and you will go to the hottest part of hell.”

The Divisional Police Officer in charge of the local government area could not be reached for comments; but his men were said to have visited the scene shortly after the incident was reported to them.