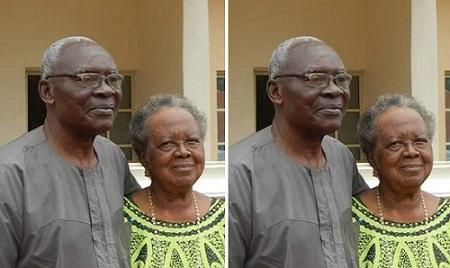 The entire Oji family of Amaoba, Oboro in Ikwuano LGA of Abia State announces the death of High Chief, Elder, Col. Ogbonnaya Oji aged 80yrs and Mrs Christiana Oji  (Nee Isika) age 76 years. The sad events occurred on the 20th of June and the 28th of May respectively.

Ogbo Oji attended KNC (Kalabari National College) Buguma from 1953 to 1958 and was the Senior Prefect in his final year. He worked with the UAC from 1958 to 1960 when he joined the Nigerian Army as an Officer Cadet. He trained as an officer cadet at the Nigerian Military Training College (NMTC) Kaduna and completed his cadet training in MONS Officer Cadet School, Aldershot in the United Kingdom where he was commissioned 2nd Lt in July 1961.

He got married in July 1964 to Mrs. Christiana Iheoma Oji (Nee Isika) and their marriage was blessed with 3 male Children and 13 grand children.

At the end of his military career he served as a member of the interim board of Anambra Aluminum Products Ltd in 1987, Chairman of the Board of Anambra Vegetable Oil Products (AVOP) in 1988 and on the creation of Abia State in 1991 was the pioneer General Manager of Abia State Transport Company until November 1994.

He was a respected community leader and until his death held the titles of Ugwumba 1 of Amaoba, Dike Oha 1 of Oboro and the Traditional Prime Minister of Oboro Clan.

He would be interred on the same day with his wife at their country home in Amaoba-Ime, Oboro in Ikwuano LGA of Abia State on Saturday 19th of August 2017.