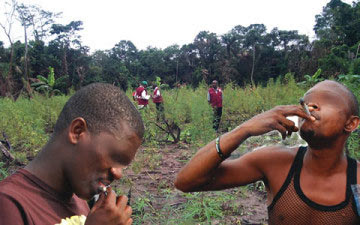 The National Alliance Against Drug Abuse, NAADA, has urged the Federal Government to declare drug abuse a national emergency.

Making the call at a conference it held to commemorate the International Day Against Drug Abuse and Illicit Trafficking, the organiser, Mr. Chucks Akamudu who is also President, Center for Ethical Rebirth Among Nigerian Youths, said youths are targeted they would be the foot-soldiers to battle the menace.

“Government effort will remain inadequate until there is collaboration among the three tiers of government and it must be expanded to create a linkage between State and Non-State actors. “The threats posed by drug abuse to society is real present and alarming, the least it deserves is a strategic, sustainable alliance by stakeholders,” Akamadu noted.


Further, he said the United Nations Office on Drug and Crimes, UNDOC, in its 2014 World Drug Report rated Nigeria number one in Cannabis Sativa seizure, while the Federal Neuropsychiatric Hospital in Kaduna, states that six million bottlers of codeine expectorant were sold in the North-Western part of the country daily, While NDLEA in 2015 alone seized drugs worth N22 billion.

“It is high time the Federal Government found the courage to acknowledge the inadequacies of
Ministries, Departments and Agencies in the daunting task of arresting and possibly reversing the deepening drug abuse trend in the country” he added.