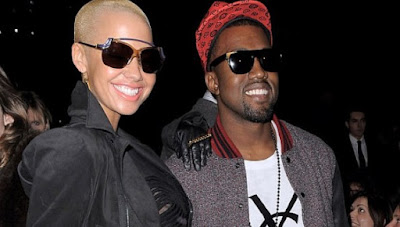 Amber Rose has claimed Kanye West 'bullied' her. The 33-year-old businesswoman dated the rapper - who is now married to Kim Kardashian West for two years before splitting from him in 2010.

The model told Complex magazine's Everyday Struggle on Monday that despite being left 'heartbroken' at the end of the romance, she has experienced 'constant bullying' from him for the past seven years. 'In all of my relationships, I have been the one that's heartbroken,' she said.

'I have never cheated on any of my boyfriends, and still have never said anything mean about Kanye ... This is after six, seven years of constant bullying from him.'

Amber found the aftermath of the break-up particularly difficult when the Famous rapper released his 2010 album My Beautiful Dark Twisted Fantasy, which fans assumed was about their relationship.


She said of the album: 'That is an extreme form of bullying as well, to have such a huge voice to put out an album, to say whatever the f**k you want. I had to just take that L. I had to take the heartbreak on top of it.'

While Amber is 'happy' to be a part of the album due to its groundbreaking nature, the model insists she was almost driven to suicide by the backlash she received after its release.

'It's a great part of history and hip-hop, and that's cool, and I'm happy to be a part of it, but during that time was not a great time for me because I'm famous and I'm broke, can't date anyone else, can't say anything on the internet because Kanye has such a voice.

If I was going to kill myself, I would have done it during those times,' she confessed.

And Amber is still angry at Kanye for mentioning her four-year-old son Sebastian - whom she has with her ex-husband Wiz Khalifa - during a Twitter row with the fellow rapper last year.

'You don't say nothing about my baby.

'I was quiet for so long. I could have got a reality show just off the fact that I was his girlfriend.

'I'mma take the high road and work my a** off, and I'm going to get everything I get on my own, so nobody can be like, 'Yo, I gave her that."

'The only thing I got from him was fame, and fame don't get you no f***ing money. Period.'