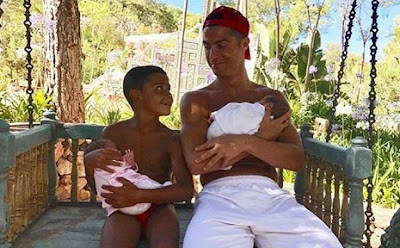 Real Madrid star Cristiano Ronaldo has revealed he wants to have seven children! The 32-year-old celebrated the arrival of children numbers two and three in June when he announced that he had newborn twins, Eva and Mateo via a surrogate.

They join seven-year-old Cristiano Jnr in the family ranks with the former Manchester United man's girlfriend Georgina Rodriguez also currently pregnant with a girl that is due in October.

That will be his fourth child, but Chrisiano Jnr wants another three brothers or sisters - and his dad seems to agree.


"He wants seven, the magic number, and I think that's good," Vidas report him as telling a Chinese television show.

He added that he wants to "go slowly and enjoy the moment".