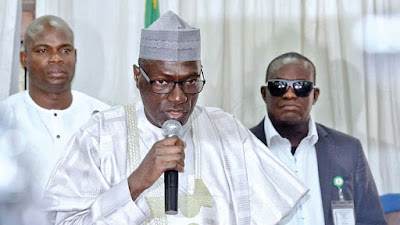 Ha! Leave Makarfi alone o. Ha!! he just officially turned PDP chairman, let him enjoy ooo, lol. (I kid). Ahmed Makarfi, the National Chairman of the Peoples Democratic Party has been involved in a car crash. He escaped death after a vehicle he was travelling in was involved in multiple collision along Abuja-Kaduna Highway.

Dayo Adeyeye, PDP spokesman confirmed the accident in a statement. According to him, Makarfi “and all other passengers in his vehicle came out unhurt.

“This is to allay the fears of our Party members, teeming supporters and well wishers who heard of the accident and have been making frantic calls; as well as those who may stumble on half-baked information,” Adeyeye said.