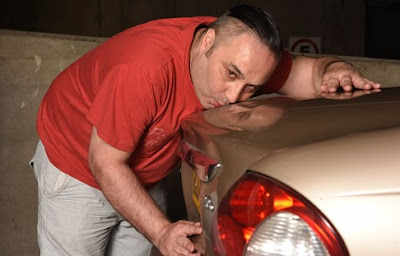 There is no one in the world Darius Monty loves more than Goldie. With her perfect curves and flawless body, she’s a beauty. And the pub boss’s sex life with the hot model less than half his age is better than with any previous girlfriends.

But shockingly the object of his full-on passion is a CAR. While many men claim to love their motors, Darius is in love with his gold-coloured X-Type Jaguar – and makes love to “her”.

The 35-year-old bachelor suffers from a bizarre sexual condition called mechanophilia. The rare disorder makes victims fall in love with inanimate objects and feel strong physical attraction towards them.

Darius said: “I don’t expect people to understand because it’s not something I fully understand myself. “I didn’t choose this but I have fallen for a car, just like other people fall for women. “I find her arousing, I love spending time with her and she is very important to me. I don’t see her as an object, I look at her and I see my lover.”


He said: “Before I bought Goldie I was in a normal loving relationship with a woman. “I didn’t see anything strange about myself or my sexuality at all. “I’ve always been a car lover, but if someone told me it was possible to have sexual feelings towards something that’s not human I’d have laughed them off just like people laugh at me now.

“I had a girlfriend at the time and I didn’t dare tell her what was going through my mind so I used the excuse that I’d left my wallet in the car and headed out. “I wasn’t exactly sure what would ¬happen as the feelings were all new to me. I just knew I felt really turned on by the notion of having sexual intercourse with my new car.

Immediately afterwards I felt ashamed and guilty, but I knew right then it wouldn’t be the last time. I walked away feeling so confused about what I’d just done.”

Baffled by his actions and feelings, Darius, of Staines, Surrey, decided to research the internet.

He says: “As disturbing as it was, I told myself I couldn’t be the only person in the world who had experienced these kinds of feelings.

“I discovered there is a condition called mechanophilia. Knowing others had ¬feelings towards cars, bikes or planes definitely put me at ease but it was a really difficult thing for me to accept.”

Yet Darius could not fight the urge to live out his sexual fantasies with the car.

His passion for Goldie soon became a daily ritual after he returned from his night shift at the pub.

And eventually he realised he could no longer it hide from his loved ones.

He said: “I was enjoying having sex with my car more than with my girlfriend.

“I even missed the car when I went up to bed at night and felt bad for leaving her alone in the garage.

“When I broke the news to my girlfriend she left me right away.

Bizarrely, Darius says his relationship with Goldie has gone from strength to strength. He has even retired her from life on the road to keep her in pristine condition.

He said: “She doesn’t cheat on me or moan about me not doing the washing up. She doesn’t have the ability to be in a bad mood.

“I haven’t lost sight of the fact Goldie is a machine and probably doesn’t love me back – I am not delusional in the sense I’d think she has her own mind.”

Darius Monty is not alone in his mechanophilia, also known as object sexuality, say experts.

Dr Mark Griffiths, professor of behavioural addiction at Nottingham Trent University, said: “It’s rare, but there are other people around the world who have fallen in love with their car.

“Object sexuality goes beyond the sex. This is someone with a deep emotional romantic attachment with an inanimate object, in this case the car. There’s nothing wrong with him in a psychological sense.

“If Darius wants to spend the rest of his life living in a non-normal relationship with Goldie that does no harm to him or anybody else, that’s OK. I have no problems with anybody’s sexual behaviour as long as it’s consensual.