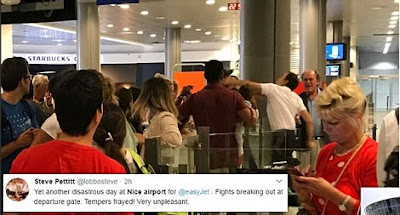 An airport worker has punched an easyJet passenger who was holding his baby at the terminal following a grueling 13-hour delay, witnesses have said.

A photo circulating online appears to show the man, believed to be a special assistance provider at Nice Airport, attacking the father in full view of other passengers.

Witness Arabella Arkwright, who was with her children at the time, told MailOnline of the chaos that unfolded as families waited to board flight EZY2122 from Nice to London Luton.

She said: 'Everyone was having the most appalling day and then, all of a sudden, a man holding a baby gets whacked.'


Mrs Arkwright said the man' was holding his nine-month-old baby while his wife vented their frustration at the lack of baby food and seats to airport employees.

She said the alleged attacker, wearing a white shirt and black trousers, repeatedly smiled at the family before lunging at the father.

‘Then out of nowhere, he just whacked him.

My husband, who's 64, had to pull the man off him and hold him against a glass door. Everyone was appalled.

The airline however has a thing to say about it. According to the airline's spokesperson; 'EasyJet is very concerned to see this picture and can confirm the person in the photo is not an easyJet member of staff nor do they work for easyJet's ground handling agents in Nice.'

And that's all they said. 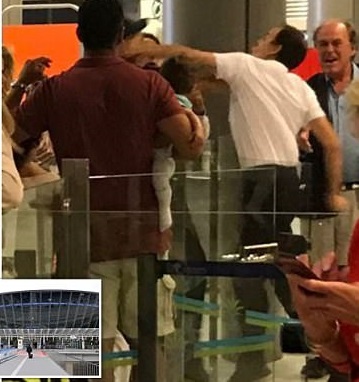