Lady Who Convinced Teenage Boyfriend To Kill Himself Sentenced To 2.5 Years In Prison 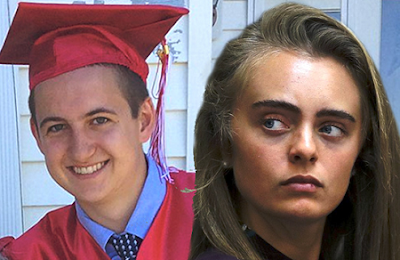 The Massachusetts woman who convinced her teenage boyfriend to kill himself via text messages was sentenced to 2.5 years in prison yesterday.

Judge Leonard Muniz convicted Carter of involuntary manslaughter in June after she waived a jury trial and took her chances with a bench trial.

Muniz ordered the 20-year-old to serve 15 months of her sentence with the rest suspended followed by 5 years probation after she’s released.

The judge took into consideration that Conrad, then 18, had a history of suicide attempts in the 2 years prior to his death.


The prosecution had urged the judge to sentence Carter to 20 years in prison. But many in the legal community expressed doubts that Carter would serve more than 2 months.

Carter was convicted of encouraging then-boyfriend Conrad Roy to take his own life by locking himself in his truck and inhaling carbon monoxide in July 2014.

After the 18-year-old died, Carter texted friends boasting that she had the power to stop him but she didn’t.

She also texted a friend saying Conrad lost his nerve and got out of the truck.

Carter texted that she “told him to get back in.”

Text messages shows Carter pressuring Conrad to kill himself in the weeks leading up to his death. She promised him she would be there to “comfort” his parents and lead them to his body.

Instead — after Conrad died — she texted his sister, Camden Roy, and asked, “Hey, do you know where your brother is?”

Then she texted his mom the next day, “Oh, hey, have you heard from Conrad?”

“I don’t think that she helped him kill himself,” Bozzi, told ABC’s 20/20. “I think she forced him to kill himself. I think she was responsible for his death.”