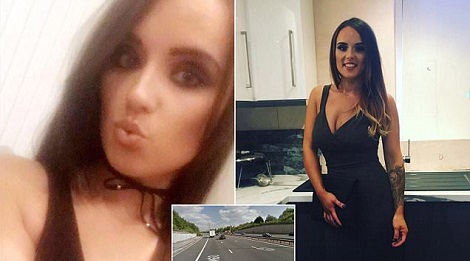 Oh well! Issa racer!! A mother-of-two has been jailed after leading police on a 120mph motorway chase that only ended when her uninsured car's engine exploded.

Megan Nolan, 24, from Manchester, was taking friends home after a night out and caught the eye of a police patrol on the M60 because she was speeding.

To avoid being captured she raced away from the officers and ran multiple red lights, forcing the police to call for back-up. She only stopped when her Volkswagen Scirocco engine blew.

The mother-of-two was today jailed for a year after a judge at Manchester Crown Court told her it was the worst he had seen in his 15 year career.


Judge Martin Rudland told the uninsured driver that her driving was 'selfish and ludicrous', and to not send her to custody would be 'wildly wrong'.

She had pleaded guilty at Manchester and Salford Magistrate's Court at an earlier hearing to dangerous driving and driving without insurance.

In CCTV played to the court, Nolan's black 16 plate Volkswagen can be seen weaving between the light traffic on the motorway, before coming off at Wythenshawe and leading the police round residential areas at speeds exceeding 70mph.

She ran multiple red lights and drove on the wrong side of the road before her engine began smoking and she had no option but to abandon her vehicle after over 20 minutes of police pursuit.

When she was interviewed by police she admitted that she had been drinking in Bury, and had been driving home when the officers put their lights on and she panicked.

'She admitted the quality of her driving was as shown on the footage. She had no insurance and she said she was a stupid idiot who was lucky that no one had been hurt'

Nolan will serve half of her sentence in custody and the remainder on licence, with supervision for six months after that and pay a £140 surcharge.

She was disqualified from driving for three years on her release, her licence will be endorsed and she must take an extended driving test.