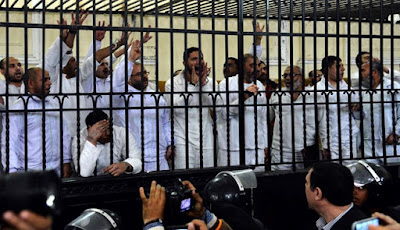 An Egyptian court sentenced on Monday 12 Morsi supporters to death over storming Matay police station and killing its chief in 2013.

Meanwhile, 140 defendants were also sentenced to life in the same case, while 238 others were acquitted.

The case dates back to mid 2013, when members of Muslim Brotherhood broke into Matay police station in Upper Egypt's Minya Province, killing the station's chief in retaliation for the police's harsh crackdown on the supporters of former Islamist president Mohamed Morsi who was ousted by the army in response to mass protest against him.

Morsi along with prominent figures of his Brotherhood group were sentenced to death over killing protesters, spying for foreign countries amid other charges pending appeals.