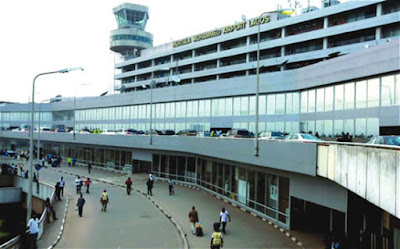 Part of the Murtala Muhammed International Airport, MMIA, in Lagos was yesterday morning thrown into pandemonium following the discovery of an alleged bomb planted by some unscrupulous persons.

The incident followed an alarm raised by workers arriving at the hajj and cargo terminal area who discovered an unattended bag.

A security source told Vanguard the terminal manager, to whom the discovery was drawn, immediately placed a call to the security agencies at the airport, leading to the arrival of the Bomb Disposal Unit which opted to destroy the bag. But the equipment used for the blast blasted a hole in one of the terminal buildings and shattered the roof.


The big bang which accompanied the blast threw a scare into users of the terminal and had everyone running in different directions for safety.

After the blast, however, it was discovered that the bag only contained booklets of the Lagos State Pilgrims Welfare Board, normally issued to pilgrims from the state.

Observers said the event meant that despite the seemingly sophisticated equipment of the Bomb Disposal Unit, they adopted a crude approach that could have cost lives, as they neither analyzed the bag nor took it away from the area for safer disposal.

The Federal Airports Authority of Nigeria, FAAN, yesterday refuted a rumoured bomb scare at the Hajj and Cargo Terminal of the Murtala Muhammed International Airport, Lagos saying it was an unattended bag at the hajj and cargo area of the terminal had caused the scare.

Reacting to the rumour, FAAN General Manager, Corporate Affairs, Mrs Henrietta Yakubu , said the bag in question contained some copies of an Islamic guide; meant for pilgrims to guide them with regards to their journey.