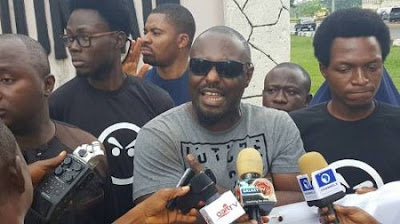 Resume or Resign protesters today resumed at the Unity Fountain in Abuja to continue their PEACEFUL protest requesting the President resumes or resigns. Aisha Yesufu, co-convener of BBOG, and popular Nollywood actor were among notable faces that joined the protesters today.

While speaking at the rally, Aisha pointed out that asking the President to resign does not mean those making the demand are inhuman or that they do not like him, as they are only asking him to do the right thing.  She noted that illness can befall anybody and Nigerians have been praying for him to get his health back, adding that the nation must move on and 200 million Nigerians cannot be held to ransom just because of one person who is sick.

"When the President came back in February, I expected that there will be an overhauling in our health system but all we heard was how the health system was good in the UK," she stated.

"We have turned to the caricature of the world,” he said.  “Has anybody seen CNN of late?  We were once a giant of Africa but now we are the joke of Africa. We are gathered here this morning to say enough is enough."