If Buhari Was My Father, I Would Have Removed Him From Office For Treatment- Charly Boy 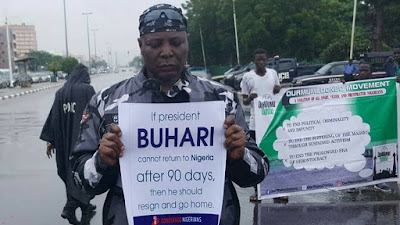 Popular entertainer and activist, Charly Boy, has denied the allegation by police that he purposely collapsed at a protest ground in abuja to gain attention. While speaking with Sunday Scoop, he said;

“It is true that I collapsed. The tear gas made me dizzy and I fell. I also stand by my words that a police officer hit me with his gun. The government is a lie and so is the police force. Everybody is lying and in deceit mode. If Nigerian people believe their government and police, then so be it. I have told you what happened. It is not my job to be trading words about whether or not it happened. My focus is on what we’re doing. The mistake the police made was to face the protesters as if they (police) had come for war. Meanwhile, they cannot face Boko Haram and armed robbers. They prefer to bully ordinary citizens.”


Speaking further on what actually transpired on the fateful day, he said, “They didn’t want us to continue the protest regardless of the fact that we had written to them that it would last for two weeks. They reluctantly agreed because we spoke with all the security agencies. I guess they were overwhelmed with the attention we were getting and they came out in full force to make sure we did not gather. On that particular day, it wasn’t even a rally; it was just the normal sit-out where we would gather and sit down in public for some hours. On that day, we were only seven that were there. The security operatives were on edge and they didn’t want us to start attracting other people. So they turned their tear gas, water cannon and attack dogs on us. Later on, they said it wasn’t us they were targeting, that they were aiming for the miscreants around. Meanwhile, they fired the tear gas and water cannon straight at us. Ironically, they got more bad publicity for their action. Anyway, we continued the protest after that day and we would still go on. We plan to continue the protest till the president returns to the country. If the president was my father, I would carry him out of that office and get him proper treatment and rest. But we know that his hands are tied personally. He is not really the one running Nigeria; it is a cabal.” he said.