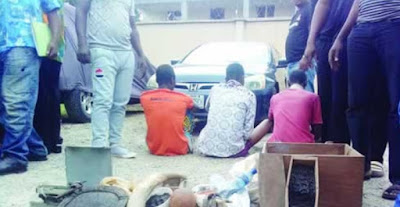 A driver, Yinka Adebanjo, has confessed to orchestrating the kidnap of his bosses in the Odogunyan, Ikorodu area of Lagos State.

Adebanjo, aka Esho, was a driver at Mateco Industry West Africa Limited, where the victims, Jamie Larcar and Mario Maglundo (Filipinos) worked.

Punch Metro gathered that the driver connived with an herbalist, Ishau Awokoya, and one Seun Ogunjobi, to abduct the expatriates.

It was learnt that the suspects, said to be members of a seven-man gang, had pretended to be vigilantes guarding some Ikorodu communities against members of the dreaded Badoo cult.


They reportedly laid in ambush for the Filipinos, who were in a Jeep driven by Adebanjo.

The compromised driver was ‘ordered’ to disembark from the vehicle as one of his accomplices took over the steering and drove away the victims.

“They took the victims to the herbalist’s house in Iperu-Remo, Ogun State, on July 5, 2017, and kept them for nine days. The victims were released after collecting the sum of N4m as ransom. While they held the victims hostage, they removed their (abductees) SIM cards from their phones,” a police source said.

Following their release, a team of the Anti-kidnapping unit of the state police command tracked down the driver to Ikotun, Lagos.

He was said to have led the detectives to arrest the herbalist and Ogunjobi.

The suspects were paraded by the Lagos State Commissioner of Police, Fatai Owoseni, in Ikeja on Monday.

Charms and other ritual paraphernalia recovered from the suspects were also displayed.

Adebanjo confessed to providing information that led to the abduction of his bosses, adding that he got N400,000 from the N4m ransom.

He said, “I was a driver in the construction company where the Filipinos work. I was attached to them by the management. Because I drove them frequently, I knew their movements. I provided the gang with information. I got N400,000 as my share of the N4m paid as ransom.”

The 32-year-old herbalist said he was not involved in the operation.

He stated that he had initially received the Filipinos as visitors before he was later told that they were kidnapped.

He said, “It was Yinka (Adebanjo) who introduced me to the gang. He first came to me for some protective charms. That was Two months ago. He said he often travelled with his boss on long distance tours and needed some protection. I made some charms for him.

“He came back a few weeks later with other members of his gang. I also made some charms for them. We became friends.

“One day, he called me on the telephone that he was coming to my place with his friends and two visitors. Initially, I didn’t know the two persons were kidnapped. I got to know when they arrived my house with them.

Apart from the gang, two members of a robbery gang allegedly terrorising residents of the Okokomaiko area, Sodiq Yakubu and Muhammed Abubakar, were paraded.

Twenty one-year-old Yakubu, aka Yanka, said he bought his gun from Cotonou, Benin Republic, for N20,000.

“I also bought two other guns from Cotonou and sold one to Muhammed (Abubakar). I am a welder, but my real means of livelihood is bag snatching from women,” he added.

Abubakar, 22, said, “I bought the gun for N22,000. I was in Ikoyi Prison in 2015 for robbery, but was released on bail after six months. I have robbed seven motorcycles so far and sold each for N40,000. Our gang leader, Ijebu, is currently in prison. One of our gang members, IK, was killed in an operation.”

The CP, Owoseni, said the arrests were results of recent raids by operatives of the command on different parts of the state.

He said, “The command arrested 24 armed robbery suspects and 10 different weapons, including two AK-47 rifles were recovered from them. Nineteen cult members were also arrested while 16 different brands of stolen vehicles were recovered. Six members of the Eye Confraternity were apprehended on August 8, which was their celebration day. Different kinds of charms were recovered from them. The command will continue to synergise with other security agencies to ensure that the state is safe and secure at all times.”