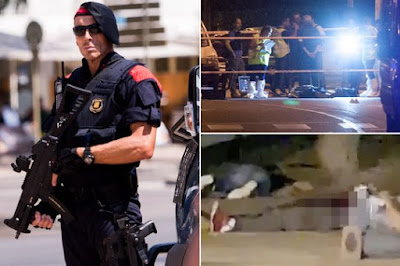 Five suspects, wearing what appeared to be explosive suicide vests, attempted to drive a van onto a pedestrian area in Cambrils, a coastal town around 60 miles from the Spanish city.

Seven people were injured in the attack in the earlier hours of this morning, one of whom later died.

Police have confirmed a single female officer from the Mossos d’Esquadra force is responsible for killing four the deadly assassins.


The officer, whose swift action is likely to have saved many lives, is now receiving counselling from a psychologist and had been due to go on holiday this week.

A fifth terrorist managed to flee the hero cop, but was later shot dead by another officer.

The fresh terror unfolded at around 1.30am on Friday, barely nine hours after van rampage left 13 dead and more than 100 injured in the centre of Barcelona.

Joseph Lluis Trapero, the head of the regional police force the Mossos d’Esquadra, said the initial attack was designed “to kill as many people as possible”.