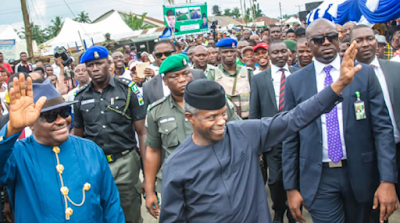 The Peoples Democratic Party has given Vice-President Yemi Osinbajo a pass mark on his performance during President Muhammadu Buhari’s medical sojourn in the United Kingdom.

The party, in a text message sent to one of Punch correspondents, on Saturday, by the Chairman of the Caretaker Committee of the PDP, Sen. Ahmed Makarfi, said it was happy to hear of the President’s return.

Makarfi said, “We have been praying for the President’s recovery and safe return home. Therefore, we are glad to hear the news of his return to the country.

“Osinbajo did fairly well in moving around the country to calm down tempers. All other things, however, remain the same. Nigerians can attest to that.”


The National Publicity Secretary of the party, Prince Dayo Adeyeye, also said, “The PDP joins other Nigerians to welcome back the President, Commander-in-Chief of the Armed Forces of the Federal Republic of Nigeria, Muhammadu Buhari, from his medical sojourn in London for over three months.

“We believe that Mr. President is healthier now to assume his responsibility at the helm of the country’s affairs. We thank the Almighty for saving his life and pray that He grants him better health and understanding on how to rescue our poor economy and relieve Nigerians from the current hardship.”

Also speaking on Saturday, the All Progressives Congress saluted the Vice President, Yemi Osinbajo, for leading the country well when Buhari was out of the country.

The group claimed that the menace of herdsmen reduced while Osinbajo was acting president.

While giving a scorecard of Osinbajo’s performance, Mohammed said the Vice President was “able to hold the ship of the nation steadily.”

He advised Buhari to carry the All Progressives Congress along in his government and not to sideline major stakeholders of the party.

He said, “I express the nation’s gratitude to Osinbajo. I have to be very careful about showering praises on him because he was not alone. But by and large, I am glad to say congratulations to him because he has not created any crisis on his own.”

“The area he could have caused crisis was his unique interpretation of hate speech, something which is not even in the constitution not in any of the country’s laws. It was his own invention but thank God it’s not going to stand the test of time because quite a number of lawyers have condemned it.

“I don’t believe Buhari could have achieved what Osinbajo did in his absence. The basic contradiction is that he is a sick man. Sick men are not assessed on the basis of their performance. But the comparison is baseless because it’s not Osinbajo who was elected.

As far as I am concerned, Osinbajo came in as a very good number two for the country, not necessarily for Buhari. I hope he continues to be loyal to the country.”