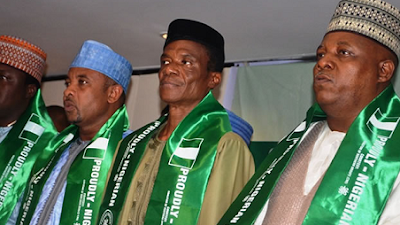 The Coalition of Northern Groups has withdrawn the quit notice given to the Igbo living in the North to leave before October 1.

The withdrawal of the quit notice was announced in Abuja on Thursday evening by the leaders of the group at a press conference.

Before the announcement was made, members of the group had met with the Governor of Borno State, who is also the Chairman of Northern Governors’ Forum,  Mallam Ibrahim Shettima and a former governor of Kano State, Alhaji Kabiru Gaya.

Also in attendance at the meeting were ex-minister Sani Daura and the Leader of Arewa Youths Council, Alhaji Shettima Yerima and a  Nollywood actor, Kenneth Okonkwo.


The group said it decided to withdraw the threat as a result of what it described as intense persuasive pressure from concerned political, traditional and religious leaders in the country.

A member of the Northern Emancipation Network, Alhaji Abdul-Azeez Suleiman, read the text of the press conference.

He said, “Most significance was our correspondence with the then Acting President, Prof. Yemi Osinbajo and most recently our interface with the Presidency through the Special Assistant to the President on Political Matters, Babafemi Ojudu.

“As a consequence of these vigorous engagements and as a cultured people with a tradition of respect for our nation’s values, leaders and elders, we are today pleased to announce the immediate suspension of the relocation clause otherwise referred to as the quit notice from the Kaduna Declaration.”

Suleiman said that the group was not afraid of sticking with the notice, but said that the suspension was as a result of the respect the group had for a “united, peaceful and prosperous Nigeria.”

The text was signed by leaders of the 14 groups, including Yerima, the leader of Youth Consultative Forum who read the Kaduna Declaration, where the quit notice was given.

Even with the withdrawal of the quit notice, Suleiman said that the group would still pursue its petition to the United Nations and the call on the Federal Government to mete appropriate sanction to the Leader of the Indigenous People of Biafra,  Nnamdi Kanu.

He equally called “for the arrest of Nnamdi Kanu and for his appropriate prosecution while calling on the Senate to demand that all senators who stood surety for him in court should rescind their bond or be suspended accordingly.”

The group further promised to “remain available for further interaction with other groups including those from the South-East with a view to building a greater united Nigeria.”

In his short speech, Governor Shettima commended the group for suspending the quit notice order, adding that the concern of the northern governors was to prevent people from hiding under the notice to harm other Nigerians.

He said there was no need to withdraw the quit notice via a statement, adding that “we are here to ensure that the quit notice was publicly withdrawn the same way it was made publicly.”

According to the governor, the order would have been withdrawn earlier than now but to avoid any division within the groups.

“I am proud of Nigerians and I am also proud of the Igbo,” he said, noting that the hope of the black man rests on a united Nigeria.