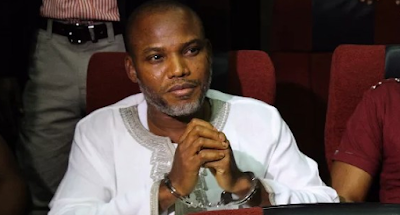 The Igbo socio-cultural group, Ohaneze Ndigbo, and the pro-Biafra group, Indigenous People of Biafra, IPOB have condemned the Federal Government’s moves to re-arrest IPOB leader, Nnamdi Kanu, describing it as the height of hypocrisy.

In a statement Saturday, the president of Ohaneze, John Nwodo, warned the Attorney-General of the Federation, Abubakar Malami, to respect his oath of office, and beam his attention on other urgent national matters.

“I am amazed that the distinguished attorney is prepared to contest the superiority of the provisions of the Constitution on fundamental human rights of freedom of movement and freedom of association over an erroneous judicial proclamation violating those rights,” Mr Nwodo said.


“A few hours ago under the watchful eyes of the Chairman of the Northern Governors Forum and in total defiance of the Head of State’s proclamation of the rights of a citizen of Nigeria to live anywhere in Nigeria and to do business anywhere in Nigeria, the Arewa Youths, pretending to withdraw their quit notice, gave qualifications to the Head of State’s proclamation, issuing conditions for enjoyment of citizenship status.”

“These same Arewa Youths are supposed to have been arrested on the orders of the Governor of Kaduna State and the Inspector General of Police for acts of treason, conversion and sedition. As the chief law officer of the Federation, the Attorney-General looks the other way. He does not go to court to seek an order of arrest or prosecution.”

Mr Malami had on Friday demanded the revocation of Mr. Kanu’s bail which was granted the defendant in April.

The application which was based on 12 grounds of appeal, followed an allegation by the AGF that Mr. Kanu exhibited flagrant disobedience of court orders on his bail conditions.

But Ohaneze said that Nnamdi Kanu, as a citizen of Nigeria, is free to hold any point of view no matter how displeasing to anyone so long as they are not inciting or provoking any criminal activities.

He argued that even though some Igbo leaders had differences of opinion with Mr. Kanu on certain matters, that did not mean they would sit back and allow his rights to be trampled on.

“This is a democracy. In democracies, leaders are abused, pelted with rotten eggs and booed at, as the former Edo State Governor was booed in Abuja a few days ago. These acts are not necessarily criminal,” the Ohaneze said.

The media and publicity secretary of IPOB, Emma Powerful, while reacting to call said the government must also approach the courts to grant its prayers and not try to subvert the legal process by arresting without the permission of the court.

“We wish to place the whole world on notice regarding the illegal and wholesome undemocratic moves by Government to re-arrest our leader Mazi Nnamdi Kanu who committed no crime known to the laws of the Nigerian state. This dangerous path of intimidation, smacks of state sponsored terrorism designed to silence free speech and infringe on our rights to peaceful assembly”.

“Merely asserting that Mazi Nnamdi Kanu is a threat to the Nigerian government is not a crime unless accompanied by legally definable crime or offence. The Buhari led administration must know that threats and more threats heaped upon intimidation after intimidation ‘do not wash’ with IPOB. Before Buhari decides to make a move to arrest our leader, he must first go to court to obtain a court order or else it will be resisted by million of IPOB members.”

He said Mr Kanu was prepared for a long drawn battle with the Federal Government.

“Nnamdi Kanu is spiritually and mentally prepared for this epic battle. He is not afraid of being locked up without trial as long as his personal physician will be allowed to visit and attend to his medical needs. In dictatorial and totalitarian regimes such as we have under this APC government, outspoken critics are often imprisoned without trial, so this undemocratic and illegal approach to resolving the thorny issue of Biafra self-determination championed by IPOB is to be expected.”