How I Lost My Wife, 3 Son-In-Laws To Boko Haram Terrorists -Blind IDP 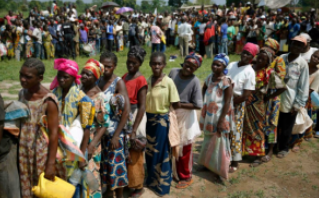 A 67-year-old blind displaced person, Mr Babakura Mustapha, has moved his family out of the Dalori Internally Displaced Persons camp in Maiduguri due to the alleged activities of rapists.

Mustapha, who has six daughters, said the Boko Haram terrorists kidnapped his wife and murdered his three son-in-laws. He added that one of his daughters was raped in the IDP camp.

About two million persons displaced by the Boko Haram insurgency are taking shelter in various camps in Maiduguri and other liberated communities in the North-East.

Six of the 11 designated camps in Maiduguri are managed by the National Emergency Management Agency, while five others are under the Wold Food Programme.


Mustapha said on Sunday in Maiduguri that he had evacuated his six daughters from the camp to save them from rapists.

The retired civil servant alleged that unknown men attacked and vandalised the tent housing his daughters after they refused to submit to their sexual advances.

He also alleged that unidentified men in the camp enticed women with N100 or N200 as token for sex, adding that they also forced themselves on those who refused to cooperate.

“I came into the Dalori camp from Bama in the past three years after the Boko Haram insurgents sacked the town.

“The insurgents abducted my wife; I have six daughters, three of them are widows because the insurgents killed their husbands, while the remaining three are spinsters.

“Since then, I have always kept vigil at night, to guard against intrusion by suspected rapists into the girls’ tent.

“My health condition worsened in the camp and my vision impaired after I had glaucoma infection,” he said.

Mustapha added that in view of his predicament he could not protect his daughters from mounting pressures of the rapists who devised various means to seduce women.

He lamented that many women suffered in the hands of the rapists in various camps in the state.

“I would rather move out of the camp than to allow my daughters become sex toys to randy elements,’’ he said.

Mustapha said that he had met a kind-hearted person in Maiduguri who offered him a room to stay with his family.

Also, Mrs Fatima Bana, a rape victim, corroborated Mustapha’s experience, and also alleged that many women had been raped in the camps in Maiduguri.

Fatima said the rapists forcefully had canal knowledge of women who refused to take money or cooperate with them.

She noted that most women had experienced one form of sexual abuse or assault in the camps.

“One night, I went out to fetch water and some men pursued me. I started running and I fell down and broke my shoulder.

“Some kind-hearted persons came to my rescue; this made the rapist to run away,” Bana said.

Alhaji Muhammad Kanar, the NEMA Zonal Coordinator, North-East, said the agency had adopted proactive measures to check sexual abuse and violation of rights of the IDPs.

Kanar said that the agency was working with the Borno State Ministry of Women Affairs and Federation of Women Lawyers, to protect and guarantee the rights of the IDPs.

“We have no reports of the incidents. Nonetheless, the agency will investigate the matter and the culprits will be prosecuted,” he assured.

The zonal coordinator added that the agency had deployed aid workers and security personnel to ensure protection of IDPs in camps within the region.

He urged the IDPs to report cases of violation of their rights to NEMA officials posted to the camps.