How Catholic Priest Was Kidnapped, Murdered In Imo 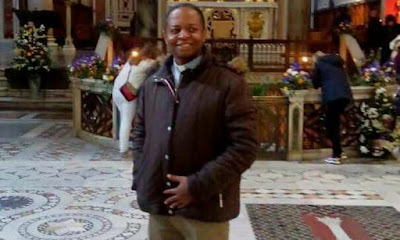 Palpable fear has gripped Imo indigenes, following the increasing level of criminality in the state.

The latest victim is a Catholic priest, Rev. Fr. Cyriacus Onunkwo, who was September 1, 2017, abducted and killed in cold blood.

Vanguard investigations revealed that in the evening of the same day, about 7pm, the newly ordained younger brother of Rev. Fr. Jude Udokwu, was somewhere close to Mbara Okporo with his friend, when some gunmen suspected to be kidnappers attacked them.

Although the priest escaped by the whiskers, it was, however, gathered that his car was riddled with bullets.


It was also gathered that the same armed group struck shortly after at Nkwoito. It was at this point, Vanguard gathered, that Fr. Onunkwo was kidnapped.

It was also gathered that the deceased priest came home to make arrangments for the burial of his father who died last Monday.

An eye-witness account at the scene of the incident said “the kidnap victim looked very much like a priest,” but could not at the time, properly identify who he was.

When the police, who were working with Rev. Fr. Christopher Ihenetu came to the scene, they saw the abandoned Toyota Corolla car, searched it and found an envelope with Fr. Onunkwo’s name on it.

Vanguard equally gathered that with this recovery, Fr. Ihenetu started making enquiries and later discovered through the help of Fr. Udem and Fr. Ukoha that Fr. Onunkwo actually came home to arrange for his father’s burial and was staying at Fr. Udem’s place.

It was further discovered that the Toyota Corolla car abandoned at the scene of the crime belonged to Fr. Onunkwo. Police confirm devt Confirming the incident in a telephone chat, yesterday, the state Commissioner of Police, CP, Mr. Chris Ezike, said the priest’s corpse had been recovered.

“The matter was properly reported to the police and we went into action. Less than 24 hours after, the Orsu Divisional Police Officer, DPO, reported the discovery of an abandoned corpse in its area of jurisdiction,” Ezike said.

According to the Imo police boss, priests of Orlu Catholic Diocese were called in immediately and they identified the corpse as their priest.

No arrests have so far been made, but CP Ezike said that the police are still working to find the abductors of the priest.