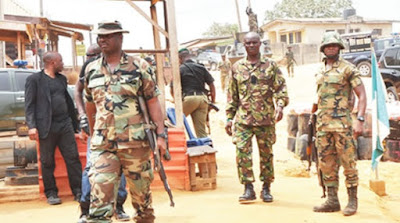 A father in Awka, the Anambra State capital, whose name could not be ascertained as of press time, has allegedly killed his only son, Chibuzor, for  proposing to marry a woman older than he (Chibuzor) is.

It was alleged that the man  procured the services of  some men believed to be soldiers to execute the act.

An eyewitness told Punch correspondent that the men in the Nigerian Army uniform had beaten their victim to a coma.  He, however, died at a nearby hospital where he was taken to.

The deceased, it was gathered , was the only son of his father. Trouble began when the late Chibuzor brought home a lady he had proposed to marry and introduced her to his father.

A source who pleaded anonymity told Punch correspondent that Chibuzor had an altercation with his father after the introduction.

The source said,”The father had rejected the choice of the woman Chibuzor brought home, saying the lady was older than his son.

“Chibuzor who had had a failed marriage that produced a child, decided to remarry after separating  from the first wife,.

“He was disappointed when the father refused to give his approval to the marriage.

“When the rift between the decease and his father escalated, the father invited some soldiers;  this annoyed his son, Chibuzor, who as a result poured hot water on his father.”

Punch correspondent gathered that the soldiers descended on the deceased and beat him to a pulp  and  he was rushed to a nearby hospital where he later died.

The event which happened on  Saturday in Umuayom village Awka, triggered a protest by the youths in the community.

The protesters made bonfires and blocked major roads in the area asking for justice over the killing of their kinsman.

She said the proposed wife in question had been given police protection while investigation was ongoing.

The PPRO maintained that nobody would be allowed to take the laws into his hands, stressing that those found culpable on the matter would be prosecuted accordingly, irrespective of their status.