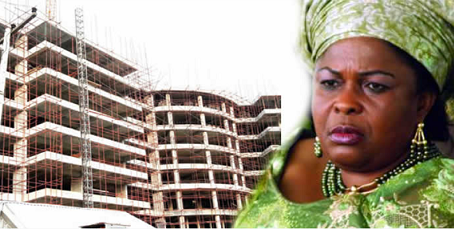 The Economic and Financial Crimes Commission has discovered an uncompleted eight-storey building in a prime area of Abuja allegedly belonging to Patience Jonathan, the wife of former President Goodluck Jonathan.

The building, which has been described by the EFCC as a ‘magnificent architectural edifice,’ has not yet been valued by the commission.

However, comparative analysis of similar buildings on several trading sites such as OLX.com and Jiji.ng, within the same area put the worth of the building at N6bn.


A Punch correspondent, who visited the building, which is located within the Central Business District, is between the National Mosque and the Federal Secretariat.

It was alleged in documents sighted by a Punch correspondent that Patience allegedly acquired the property through her foundation known as Aribawa Aurera Reach Out Foundation.

In a document, which has been attached to a court application, the anti-graft agency said it had written to the Corporate Affairs Commission to get the identities of the directors of the foundation who are believed to be fronts for Patience.

The commission further stated that it had written to the Abuja Geographical Information System to get the history of the property and how and when it was bought.

The EFCC had a few months ago frozen an account belonging to Aribawa Aurera Reach Out Foundation with account number 1222014221 in Ecobank with a balance of N479m.

The anti-graft agency said there was no way Patience would have been able to afford such a property as her last known job was Permanent Secretary in Bayelsa State.

The document read, “Plot 1350 Cadastral Zone A00 CBD which was allocated to Ariwabai Aurera Reach Out Foundation in 2010 and Certificate of Occupancy issued in 2011. The plot bears an eight-storey building still under construction.

“Inference may be drawn from investigation that the suspect’s (Patience) last known official position was permanent secretary in Bayelsa State. Hence, there is no way such magnificent architectural edifices could have been built within a short space of time.

“There is a high probability that it could have been built with the proceeds of crime. It is evidently clear that it is a case of money laundering but there is a need to do more investigation.”