Ambode Has Made Life Easier For Women In Lagos 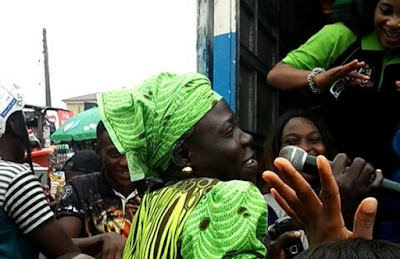 Lol, so many guys might hate me for this, but hey... Lagos State Governor, 'Asiwaju' Akinwunmi Ambode has made life better for women in abusive marriages/relationships and even single women who men batter! You know what? Aside from campaigning on tv, Forums and pages of newspapers, his excellency aired women who understand women to go round singing and campaigning in their dialect educating women on numbers to call if they are violated. One of the videos is currently trending on IG and it's been magical! So many people have been retweeting it including latest violence victim- Mercy Aigbe, who Lagos State rose up to fight for after her husband allegedly battered her. Well one of the catchy words of the campaign is,;

'If a man slaps you, dial 112, If he sleeps with you by force, dial 112... aww how else can we be in love with Governor Ambode, we are in 'Londen' people, lol. Yayyyyy! See the video below and words from Mercy after the cut.


DSRT sensitization at Mushin 💪
There is no justification for Violence!..... it is a NO! NO! A lot of people have had their lives cut short in that process!
You have no right to hit your partner regardless!!!!! Other measures should be taken to solve Issues..... For help pls call @opdlagos Emergency no 112!
Domestic Violence is a crime punishable under the law!
Stop blaming yourself!
Stop finding excuses for that violent partner!
Stop shaming victims!
#speakup and get help!
#zerotolerancetodomesticviolence
#saynotodomesticviolence