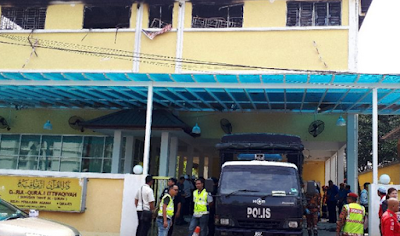 Twenty-three people, mostly children, were killed Thursday by a blaze that tore through a Malaysian religious school, trapping them in a dormitory with metal grilles barring its windows.

Pupils and teachers inside the Islamic study centre in downtown Kuala Lumpur screamed for help as neighbours looked on helplessly.

Many of the bodies of the victims -- who included 21 boys mostly in their teens -- were found piled on top of one another, indicating there may have been a stampede as the students sought to escape the inferno, which erupted before dawn.


Firefighters rushed to the scene and the blaze was out within an hour but it wreaked terrible devastation. Pictures showed ash-covered, fire-blackened beds in the students' sleeping quarters.

The accident will increase scrutiny of the religious schools known as tahfiz, where many Muslim Malaysians send their children to study the Koran but which are not regulated by education authorities and often operate illegally.

Norhayati Abdul Halim, who lives opposite the school, told AFP she heard screams as the morning call to prayer rang out.

"I thought there were people fighting," the 46-year-old said. "I opened the window to my house and I could see the school on fire -- they cried for help but I couldn't do anything."

By the time firefighters arrived at the Darul Quran Ittifaqiyah school in the heart of the capital, "the screams had stopped", she added.

Officials said that the children were unable to escape the fire because the blaze blocked the only door to the top-floor dormitory and the windows were closed off with metal security grilles.

Fourteen students managed to get out, and seven are being treated in hospital.