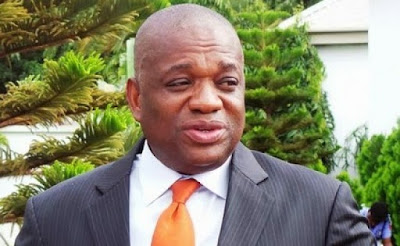 The absence of the prosecution on Tuesday stalled the trial of a former Governor of Abia, Orji Kalu, who is charged with N3.2 billion fraud at a Federal High Court in Lagos.

Mr. Kalu is being prosecuted by the Economic and Financial Crimes Commission, EFCC, alongside his former Commissioner for Finance, Ude Udeogo, on 34 counts bordering on fraud.

Also charged with the accused is Mr. Kalu’s company – Slok Nigeria Ltd. The accused had pleaded not guilty to the charges.

On Tuesday, the trial of the accused could not proceed as scheduled following the absence of counsel to the EFCC, Rotimi Jacobs.


Mr. Jacobs had written a letter to the court informing it of his absence and the court consequently, granted a short adjournment to Oct. 6, 7, and 8 for continuation of trial.

At the last adjournment on June 7, the prosecution had called on its fifth witness to give evidence before the court.

In her evidence, the witness, Toyosi Ekorhi, a Compliance Officer at the First City Monument Bank, FCMB, told the court that the bank had forwarded the account status of Slok Nigeria Ltd to the EFCC.

She said it was in response to an enquiry by the commission about two months ago.

The witness also told the court that she joined FCMB on October 13, 2008, adding that the documents were retrieved from the archives of the defunct Inland Bank Plc.

She, however, said she had no knowledge of its contents because she never worked at Inland Bank.

According to the witness, the company’s statements of account sent to the EFCC covered transactions carried out between August 27, 2008 and November 12, 2012.

She again claimed ignorance of the transactions which she said were done in Finbank Plc.

Meanwhile, during cross-examination, defence counsel, Gordy Uche, had enquired from the witness if the first accused was listed as a director of the company.

In response, the witness said the name of the first accused (Mr. Kalu) was not listed as one of the Directors of Slok Nig. Ltd.

She had added that the second accused (Mr. Udeogu) was also not a signatory to the company’s account.

The News Agency of Nigeria reports that the EFCC had on October 31, 2016 slammed the charges on Messrs. Kalu and Udeogo.

In the charge, the accused were alleged to have committed the offences between August 2001 and October 2005.

Mr. Kalu was alleged to have utilised his company to retain in the account of a First Inland bank, (now FCMB), the sum of N200 million.

The sum is alleged to have formed part of funds illegally derived from the coffers of the Abia State Government while Mr. Kalu was governor.

In one of the counts, his company (Slok Nigeria Ltd) and one Emeka Abone, still at large, were also alleged to have retained in the company’s account the sum of N200 million on behalf of the first accused (Kalu).

In counts one to 10, the accused were alleged to have retained about N2.5 billion in different accounts which funds were said to belong to the Abia State Government.

Cumulatively, in all the counts, the accused were alleged to have diverted over N3.2 billion from the Abia State Government’s treasury during Mr. Kalu’s tenure as governor.