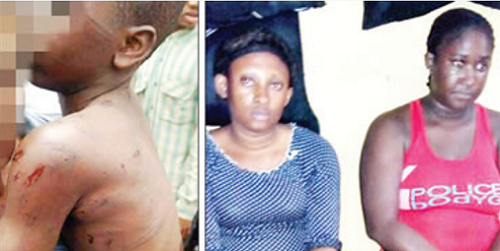 A woman, Chinyere James, has been arrested by the police in the Okokomaiko division, Lagos State, for allegedly torturing her nine-year-old cousin, Emmanuel.

Punch Metro learnt that the victim had been wrongly accused by the 28-year-old of defiling his three-year-old sister at their home on Akinberu Road, Okokomaiko.

The aunt, without investigation, allegedly flogged him for hours, as his plea of innocence fell on deaf ears.

A resident was said to have rescued him and reported the matter to the Lagos State Office of the Public Defender.


An official of the agency, who did not want to be identified, said the case was reported to the police.

She said, “The boy’s mother, Joy, and the aunt, Chinyere, live in the same single-room apartment with their parents. Joy, who is 27 years old, had Emmanuel and the three year-old  for different men.

“Chinyere tortured the boy for an offence he didn’t commit. Investigation showed that it was one of their neighbours that defiled the boy’s three-year-old sister.

“When the police interrogated Joy, she took responsibility for the injuries on the boy’s body and lied that Chinyere did not touch the boy.

“But the truth later came out. The police arrested her and her sister, Joy, while the two children were taken into protective custody.”

Punch was told that the three-year-old had been tested by Mirabel Medical Centre, Lagos State University Teaching Hospital, Ikeja.

A report was still being awaited to ascertain the culpability of the neighbour.

The Director of the OPD, Mrs. Adebukola Salami, said government would not condone child abuse.

She said, “The Lagos State Government has zero tolerance for child abuse. This is a warning that it is irrelevant if the abusers are the parents of the child. Nobody is above the law. Child abuse is a criminal offence and abusers will be prosecuted.”

It was learnt that the sisters had been charged before an Ojo Magistrate’s Court on counts of assault.

The charges read in part, “That you, Chinyere James and Joy James, on or before September 24, 2017, on Akinberu Road, Okokomaiko, in the Lagos Magisterial District, did conspire together to commit felony to wit: indecent treatment of a child, thereby committing an offence.

“That you, Chinyere James, on the same date, time and place, in the aforementioned magisterial district, did unlawfully assault one Emmanuel James by inflicting injuries on his body.”

The defendants were said to have pleaded not guilty to the charges and were subsequently admitted to bail.

The case was said to have been adjourned till December 13, 2017.