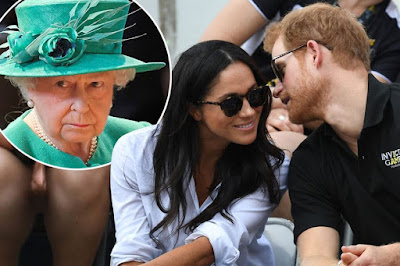 Smitten Prince Harry and girlfriend Meghan Markle reportedly had an hour-long tea party with the Queen last week as rumours continue to swirl about an imminent engagement.

The royal, 33, and the Suits actress, 36, reportedly enjoyed a discreet visit to Buckingham Palace last Thursday.

It's believed that Harry was desperate for his grandmother to meet his girlfriend after the pair first met 18 months ago.

According to Daily Mail, the couple were driven up to the Queen's private entance in a blacked out car for their informal hour-long meeting that took place around 5pm.


Given their meeting, the publication reports that friends say an engagement 'is not a question of if but when'.

Engagement rumours have been hotting up about the duo after they were spotted holding hands and kissing at the Invictus Games - where Harry was also seen meeting his girlfriend's mum and friends.

And last week, a source claimed he's planning to pop the question the minute she wraps up filming her last season of Suits next month.

Sources say as soon as Harry gets down on one knee Meghan will leave her current hometown of Toronto for London, where she'll get involved in what an insider described as a 'detailed media rollout'.

"Harry and Meghan will most likely hold a small photo call at Kensington Palace, with just one photographer and journalist invited.

“On the same day, they’ll do a TV interview that will be syndicated around the world,” a source said to US Weekly.