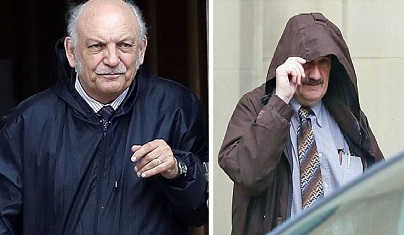 An assistant pastor who helped a church minister sexually assault female parishioners has been jailed for more than eight years.

Laurence Peterson, 59, blocked doors and held victims down as Rev John Wilson, 70, performed 'grotesque' exorcisms on member of the congregation.

A jury heard Peterson may have also laced the women's tea with drugs to make them more compliant.

The offences took place at the Liberty Pentecostal Church, in Keighley, West Yorkshire, over three decades and has left the victims mentally scared.


Peterson was found guilty of counts of conspiracy to commit indecent assault and two charges of aiding and abetting Wilson to commit sex acts by a jury at Bradford Crown Court.

Rev Wilson was jailed for 21 years earlier for a string of sex offences against six women.

Mary Wilson, his wife, who was found guilty of aiding and abetting her husband was handed a 22 month suspended sentence.

Mary, 79, sat in the public gallery today alongside Peterson's supporters from the church for the sentencing.

Judge David Hatton QC told Peterson he was satisfied Wilson had been the principal offender.

But Peterson had frequently blocked the victims' escape and barricaded one newly-wed bride inside a prayer room as Wilson sexually assaulted her as her husband tried to enter the room.

Peterson was jailed for eight years and two months. He is on the sex offenders register and is subject to a sexual harm prevention order indefinitely.

He is also banned from holding senior positions in religious bodies or perform ministries.