Another Lady Gives Details Of Her S-xual Activity With R.Kelly & The Abuse That Came With It 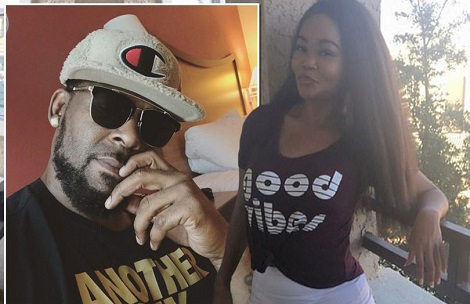 No, this can't be coincidental. Too many women speaking up now. Won't be shocked if he ends up behind jail pretty soon! Damn! That dude is a lord in his small world, TF? Lmao, can;t deal!

A divorced single mum has opened up about her alleged abusive relationship with R Kelly, claiming he isolated her, starved her and forced her to have sex with his other girlfriends who he “raised” and called his “pets”.

Dallas-based DJ Kitti Jones first met R Kelly at a party after one of his shows in June 2011, where they exchanged numbers and he apparently ordered her to call him “Daddy” from then on.


Shocked and wondering whether to leave, she admits her infatuation with the singer convinced her to stay, and claims he then set about “training” her during oral sex.


She said: "He was like a drill sergeant even when he was pleasuring me. He was telling me how to bend my back or move my leg here. I'm like, 'Why is he directing it like this?' It was very uncomfortable. But he tried to make me feel special about [the trip]. Like, 'If I didn't really like you, I wouldn't have done that, and I wouldn't even be wasting my time flying you out, and I respect you.’"

Kitti says there was another red flag when he allegedly banned her from talking to or looking at his male employees. However, she was falling in love and in November 2011 agreed to quit her job and move into his Chicago apartment after he offered to pay her double her salary.

But once she agreed, she claims he gave her a hint about what was to come.

She said: "He said, 'I have friends and I have girls I've raised.’ I didn't know what he meant by 'raised' at the time.

He said, 'I eventually want you to meet them, but I want to make sure you're mentally ready for that.’"

The mother-of-one alleges that once she moved in, she was forced to constantly text the star - whose real name is Robert Kelly - with her every movement, and wear baggy sweatpants whenever she went out so as not to look attractive.

And things apparently got violent when Kitti says she watched the video at the centre of his 2008 child pornography trial, which allegedly showed him urinating into the mouth of a 14-year-old, although he was acquitted on all charges because the identity of the female could not be established.

She claims he “turned into a monster” when she brought it up, and that he kicked her and delivered a series of open-handed slaps to her face.

In total, Kitti alleges that she was assaulted 10 times in the first year of their relationship, with the attacks becoming even more “heavy” in the run-up to his 2012 Single Ladies tour.

Once he hit the road, she says things got calmer, but that her boyfriend insisted on wearing a jacket emblazoned with ‘Single’ on stage, where he judged a stripping contest from a throne and made women fight over his sweaty towel.


He even brought Kitti out on stage, chained her in a cage and simulated performing oral sex on her behind a white curtain.

Then in January 2013, she says she was moved out of his main home and into a flat attached to his recording studio in Trump Towers to make way for what she now believes was a new girlfriend.

There she says she unknowingly lived alongside two of his other girlfriends, although they didn’t realise the others were there because every time they wanted to leave the room, they had to text his staff.

As punishment, she claims Kelly would take her phone off her, leaving her unable to request food or to use the toilet. She claims she went for up to two and a half days without eating.

Then an even darker chapter apparently began in March 2013, when he allegedly brought in a naked woman and ordered her to perform oral sex on Kitti, telling her, "I raised her. I've trained this bitch. This is my pet.’"

From then on, Kitti claims he forced her to have sex with a slew of women who he would fly in, and that if she said refused to do the “traumatic” things he wanted, then she would be punished.


According to the DJ, Kelly recorded everything and sometimes had her give him oral sex while he watched footage on his iPad of other girls he’d made have sex.

She vomited after performing oral sex on one of his girlfriends because she felt so demeaned, but says the worst thing she saw was when Kelly allegedly urinated on two women while she and them performed a sex act on him.


Kelly’s rep has rubbished Kitti’s claims that the sex and day-to-day running of their two-year relationship was anything other than consensual.