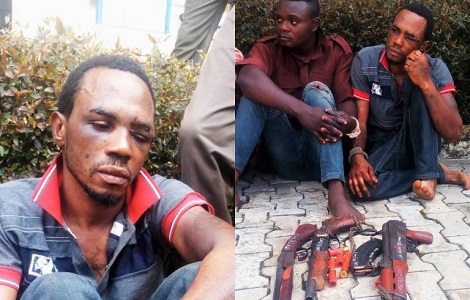 Operatives in Ondo state have nabbed an armed robbery suspect identified as Kola Ogunbiyi for snatching a private car belonging to a police officer in the state.

Ogunbiyi popularly called ‘Oloye’ from Emure Ekiti was accused of terrorizing the people of Ondo state with members of his gang. The armed robbery suspect is currently awaiting trial at a prison in Ogbomoso area of Oyo state after he was accused of stealing a transformer cable.

Ogunbiyi was paraded on Monday before journalists in Akure alongside twelve other robbery suspects who were also accused of robbery and terrorizing some innocent residents in the state.

The 35 year old armed robbery suspect was arrested after disposing of the police officer his personal belongings and snatching his vehicle at gun point.


The Police Public Relations Officer, (PPRO) in Ondo state, Mr. Femi Joseph, said the hoodlums were apprehended at various locations in the state.

Mr. Joseph revealed that the hoodlums had been on the black lists of the police after reported cases of robbery mostly at the state capital.

He disclosed that men of the command from the Special Anti Robbery Squad (SARS) nabbed the suspects through a discreet investigation. He gave the names of other members of his gang as: Ayodele Abayomi, Ayoh Genesis, Oluwafemi Ayodeji, and seun Ayodele and accused them of snatching a red boxer motorcycle at the popular mother and child hospital road in Akure.