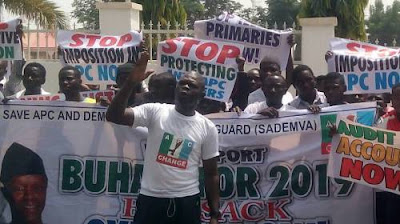 The youth wing of the All Progressives Congress (APC), under the aegis of Save APC Democracy Youth Vanguard, on Monday besieged the National Secretariat of the ruling party in Abuja,  demanding the immediate sack of the National Chairman, Chief John Oyegun.

The youths, wielding banners and placards, said they were protesting the gross violation of the party's constitution and demanded an immediate audit of the APC accounts.

Addressing journalists, the leader of the group , Peter Oyewole, said that since 2015, when Mr. Oyegun came on board as chairman of the party, its finances have not been audited and made public as stipulated by the law.


The group also accused the Oyegun-led National Working Committee (NWC) of imposition of candidates at all levels, adding that there can never be fairness and justice in any party with the shackles of candidate imposition.

Mr. Oyewole emphasized that the current national chairman cannot work in tandem with the APC agenda and President Buhari. He said that if Mr. Oyegun is not removed from the office he will continue to rubbish the efforts of the president in the fight against corruption.

The youth threatened to picket the secretariat and chase out all the staff if the National Executive Council (NEC) meeting fails to address his removal. The group has given the party a one-month ultimatum to do the needful or face the consequences.

The chairman narrowly escaped being mobbed by the protesters when his convoy arrived the secretariat and drove in the middle of the angry crowd.

It would be recalled that 17 governors plotted Mr. Oyegun’s removal when they accused him of unilateral running the party with only seven of their colleagues.
, 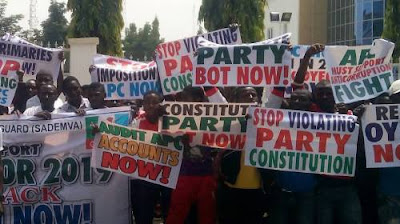 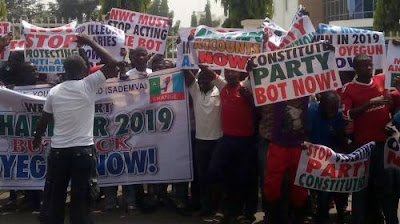