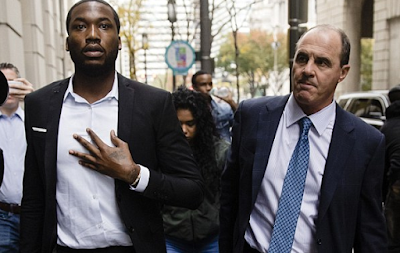 Rapper Meek Mill has been sent back to jail for up to four years for breaching the terms of his parole.

A judge ruled on Monday two new arrests meant he had once again failed to live up to the conditions of his release.

However the hip hop star's attorney has claimed the adjudicator has a personal bias against his client, who was convicted of drug dealing and gun possession back in 2008.


Tacopina also claimed she has a 'personal bias' against Mill and they plan to appeal the sentencing.

His attorney claimed last year the judge had a meeting with the rapper in chambers and asked for him to do a remake of On Bended Knee by Boyz II Men and to give her a mention in the song.

He alleged that when the hip hop star laughed off the request the judge declared she was 'not kidding' and when Meek refused she said 'suit yourself'.

The rapper, real name Robert Rihmeek Williams. was skating on thin ice after being found to have violated the terms of his parole on drug dealing and gun possession charges on multiple occasions.

Even though one of the cases, for an alleged airport assault, was dropped the adjudicator decided it was still enough  to warrant further punishment.
According to the Philadelphia Inquirer, the Young And Gettin' It rapper will spend between two and four years in state prison for his latest violation.
And there was drama in court as the exasperated Judge Genece E. Brinkley told the 30-year-old he had been 'thumbing your nose' at her after she had given him multiple opportunities to go straight.As she delivered her sentence she told the rapper, 'I’ll be done with you.'
After she handed down her decision the suit and trainers-wearing hip hop star was led away in handcuffs for his latest spell in the clink.