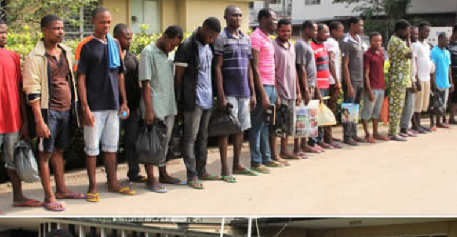 Twenty-nine Benin nationals, including a woman, were on Tuesday hauled up before a Federal High Court in Lagos charged with dealing in petroleum products without licenses.

They were, however, refused bail and were remanded in prison until the next date of adjournment.

The Economic and Financial Crimes Commission had arraigned them for dealing in petroleum products in Nigeria without licenses.

When the case came up on Tuesday, Justice Hadiza Rabiu-Shagari, asked if all the accused understood the English Language, but only the woman answered in the affirmative, while others said they understand only “Egun” language.

“So you all came to Nigeria in your numbers for what? What the hell are you all doing in Nigeria? ”

She directed that the charge be read to the 21 accused and interpreted to them in Egun and they all pleaded not guilty.

The Defence Counsel, Mr Abdulmalik Ibrahim, urged the court to give a date for their bail application to be heard, saying they have been in detention for almost two months.

The prosecutor, Mrs Zainab Ettu, did not object to the defence counsel’s request.

Consequently, the court adjourned the case to Nov. 15 for hearing of their bail application but remanded the accused in prison.

The court also directed the prosecution to produce an independent Nigeria-based interpreter on Nov. 15 to ensure that the court was not misled by the interpretation in Egun.

The offence contravenes the provisions of Sections 1(19), (a) of the Miscellaneous offences Act, Laws of the Federation 2004.

Meanwhile, another batch of eight Benin nationals were also arraigned on separate charges bordering on illegal dealing in petroleum products in the country.

The charge was again interpreted to them in Egun and they also pleaded not guilty.