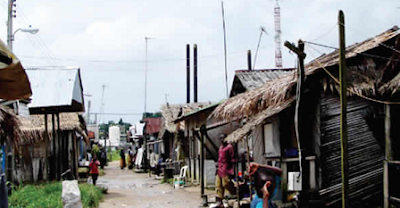 There was pandemonium on Saturday at Otor-Iyede in the Isoko South Local Government Area of Delta State as the lifeless body of a middle-aged man simply identified as Efe Seki was found dangling in his apartment.

It was learnt that Efe hung himself after his lover, a mother of two, decided to end their three-year relationship.

The unnamed lady reportedly refused to return to the deceased despite pleas by Seki’s relatives and friends.

Southern City News gathered that the deceased, whose corpse was found in his one-bedroomed apartment in the early hours of Saturday, had earlier threatened that he would commit suicide if his lover did not return.


Though it was not exactly clear why Seki was abandoned by his lover, a woman, who craved anonymity, claimed it was because the suicide’s manhood lost its functionality.

Southern City News gathered that friends and relatives of the deceased had been searching for him since Friday night until his body was found tied to a plank in his apartment, hanging.

The situation was said to have created panic among residents of the agrarian community.

The deceased, whom sources claimed was a tipper loader in the area, was said to have deceived neighbours that he was travelling.

A source said, “The incident occurred on Sunday but the corpse was discovered the next Saturday. He was a tipper loader. It was his colleagues and some friends that discovered the lifeless body in his apartment, dangling on a rope.

“After waiting for him at the place of work and he didn’t show up for work, they went to check his house. It was then that they discovered that his door was locked. So, they burst it and saw his dangling body.”

Another resident, who spoke on the condition of anonymity, added, “The guy was cohabiting with a lady who had earlier married someone else before with two kids. They had issues and the lady left the house and also promised not to return.

“It was alleged that he threatened to kill himself if the woman didn’t return to him.  We heard the woman allegedly left because his manhood wasn’t functioning, so she wasn’t enjoying the relationship.”

A senior police officer at the Oleh Divisional Police Headquarters, who confirmed the incident on the condition of anonymity because he was not authorised to speak to the press, said the man killed himself over a failed relationship.

The policeman added that the police were still investigating the incident.

Efforts to get official confirmation from the Delta State Police Command were unsuccessful as calls and text messages sent to the Commissioner of Police, Mr. Zanna Ibrahim, were not responded to.