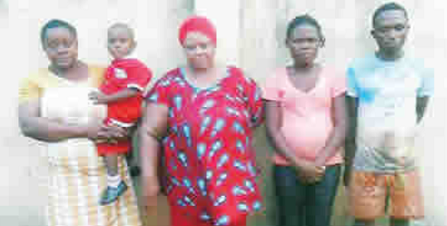 The Anti-Kidnapping unit of the Imo State Police Command has arrested a couple, Ifeanyi Anyanwu and Amarachi Ugorji, for allegedly stealing and selling a two-year-old boy, Ikechukwu Nwachukwu, for N500,000.

The couple allegedly stole the child on August 28 from his parents in Umuozu-Uguiri in the Isiala Mbano Local Government Area of the state.

Punch Metro, however, learnt that prior to the incident, Anyanwu and Ugorji had sold their first child on credit to a man in Port Harcourt, Rivers State.

The state Police Public Relations Officer, SP Andrew Enwerem, during a parade on Wednesday, said in the latest incident, the couple kidnapped and sold Nwachukwu for N500,000 to one Ifeanyinwa Duru.

The police spokesperson, who described the development as worrisome, said the couple, Duru and Emmanuel were nabbed in Aba, Abia State, adding that the child was rescued unhurt.

Enwerem said, “On August 28, 2017, Ifeanyi Anyanwu, 23; and Amarachi Ugorji,18, conspired and kidnapped Ikechukwu Nwachukwu, who is two years and six months old, from his parents in Umuozu- Uguiri in the Isiala Mbano LGA.

“The two buyers were arrested in Aba following painstaking investigation, while the child was rescued unhurt and has since been reunited with the legitimate parents by the command.

“The suspects have confessed to the crime and investigation has been concluded. The syndicate will soon be charged to court.

“The Commissioner of Police, Chris Ezike, has instructed all heads of the tactical units of the command to go all out against those who trade in human beings, especially children, who have done nothing wrong except that they were born into a society that has lost its values.”

Emmanuel said her desperation to have a male child after the death of her husband lured her into the crime.

The couple told our correspondent that they had earlier sold their first child to an unnamed person in Port Harcourt for N200,000, on credit.

A police source told Punch Metro that operatives of the command were already closing in on the buyer and would soon arrest him and rescue the child.

Our correspondent learnt that 18-year-old Ugorji was already pregnant with another child.